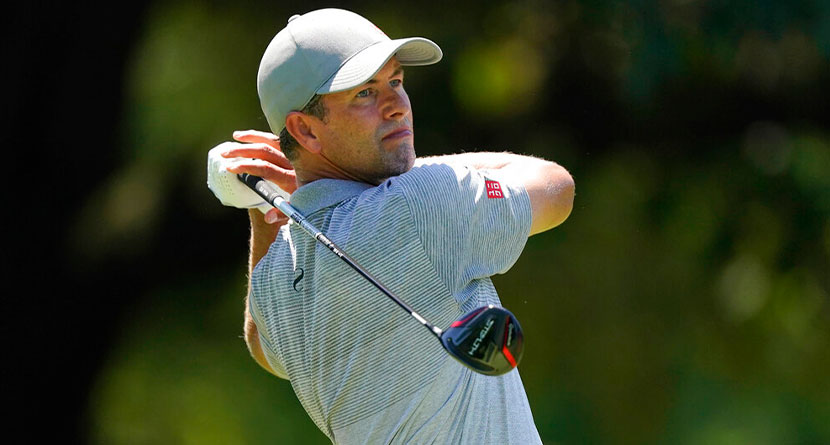 Scott shot a bogey-free 7-under 63 Friday to equal the host club Victoria’s course record also carded by local pro David Micheluzzi in the opening round.


The pair will go head-to-head in the final group on Saturday after Micheluzzi carded a steady 71 at Kingston Heath to be tied for the lead with Scott at 8-under 134.

Championship favorite and British Open champion Cameron Smith had a nervous afternoon before eventually making the weekend right on the cut line at 2-over after a 73 Friday.

Men and women are playing off alternate tees at both courses over the first two rounds. in a historic first for a national golf championship.

Green had five birdies in her last eight holes to take the halfway lead at 11-under 134 in the women’s event.

This weekend is going to be HUGE! 🏌️🏌️‍♂️🏌️‍♀️

She described the 6-under 66 as “my best ball-striking round of the year” and added “I felt like I hit pretty much where I wanted to.”

South Korea’s Jiyai Shin, Green’s playing partner for the first two rounds, had seven birdies in her 68 to sit at 9-under, two shots ahead of compatriot So Yeon Ryu, Women’s British Open champion Ashleigh Buhai and Kim.

Australian Minjee Lee continued her steady climb up the leaderboard to be sixth at 5-under, six shots off the pace heading into the third round. Lee shot her second consecutive 70 on Friday.

Five-time Australian Open champion Karrie Webb, who is semi-retired, had a 3-under 70 at Kingston Heath. She’s 13 shots behind her compatriot Green.

Scott found his putting touch on Victoria’s fast and true greens, rolling in a left-to-right eagle attempt from off the fringe of the 18th green.

“It was a good day — a lot of solid stuff and I just worked my way around the course,” Scott said. “There’s a lot of trouble out here and I was aware of it every hole but I managed to stay out of it most of the day, whereas yesterday I was in most of the day. So I turned things around and am in a good spot going into the weekend.”

The final two rounds will be played at Victoria Golf Club.