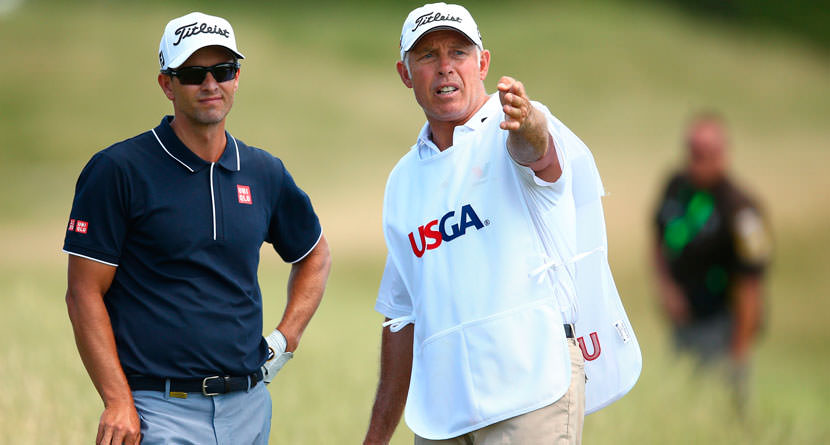 Adam Scott’s team will have a whole new look this week at the U.S. Open at Shinnecock Hills. Despite working with David Clark exclusively for the last 18 months, Scott and Clark went their separate ways after the Aussie was able to advance through the 36-hole U.S. Open sectional qualifier two weeks ago.

“There’s never good timing for these kinds of things,” Scott said, according to the Associated Press. “The player-caddie relationship is an interesting one. I’ve had a few over the years. It’s an intense work environment. It’s a love-and-hate thing. It becomes a revolving door out there. Sometimes, I have to make selfish decisions.”

Swapping out caddies the week before a major championship could be seen as foolish, but Scott is falling back on a familiar face this week at Shinnecock: Lenny Bummolo. Bummolo and Scott have worked together in the past, but only on the host course of the U.S. Open.

Club caddie for Adam Scott today, and from what I hear, all week. Also using short putter for the first few holes. Lot of changes from 6 days ago.

Bummolo is a local caddie who has looped for Scott over the past five years when the former Masters champ would play the course. He was also on the bag when Scott fired a 9-under par 63 to set the course record in 2013, although the mark was bettered by Kevin Stadler a year later.

“Lenny has been here for so long. He knows the course so well, and the greens,” Scott said. “I really think it’s a valuable move here this week for me stand there and hit it where he says. He’s going to be right more times than me.”

Scott will also have a new set of eyes watching him on the range as he brought back in his brother-in-law Brad Malone to work with him on his swing. Malone and Scott worked together previously as well but parted ways last year as Scott enlisted the help of George Gankas.

“It’s a recent thing – very recent,” Scott said. “We’ve been communicating a little bit the last few weeks. I feel like it’s a positive thing for my game.”

Whether the new additions to the team will be advantageous or not will become apparent when Scott tees off No. 10 on Thursday at 1:47 p.m. alongside Henrik Stenson and Martin Kaymer.