Adam Scott: Wife “Sent Me Back” to Work 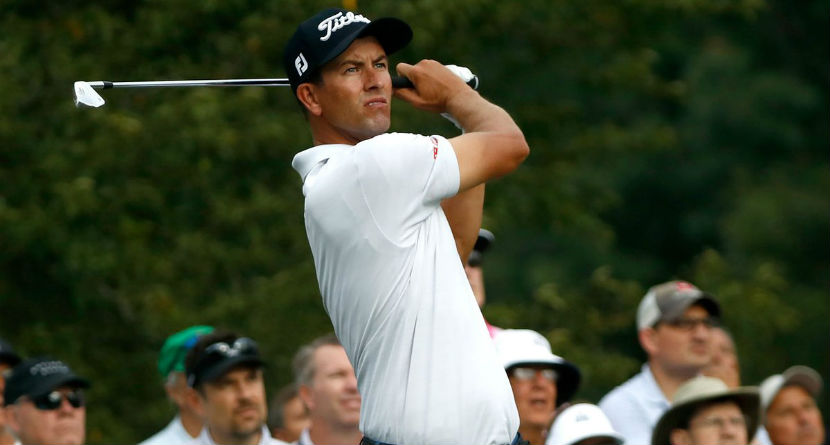 Adam Scott may have a green jacket and the bone structure of an angel, but when it comes to work, even he has a boss and he happens to be married to her.

Following the birth of his second child, Byron, the 37-year-old Aussie was back at the office at TPC Boston trying to play his way into the next leg of the FedEx Cup playoffs at the BMW Championship, thanks in large part to his wife’s marching orders. Who needs paternity leave?

Scott originally planned to skip this week’s playoff stop at TPC Boston to be at home with his family, but Byron arrived earlier than expected. Had Scott not returned for the second postseason stop, he [was guaranteed] to miss the final two playoff stops mired at 73rd on the points list (the top 70 advance to the BMW Championship).

“[Wife] Marie knew I wasn’t really satisfied with my year and to wrap things up early and unsatisfied, she probably knew I wasn’t going to be at my happiest,” Scott said. “So she sent me back over here to get the job done.”

‘My wife sent me back over here.’

After the birth of his second child, Adam Scott is back in the game: https://t.co/NJoi1XTgxi pic.twitter.com/8Du1lF1j6j

Scott, who won this event in 2003, also said the early return will allow him a chance to turn what has been a relatively pedestrian season around in time for the Presidents Cup later next month.

“There’s been lots of good things in my golf this year and it really hasn’t shown up with any great results,” Scott said. “But there’s definitely some weight lifted with the arrival of Byron. I feel a bit more free on the golf course and really upbeat about being back.”

Unfortunately, Scott missed the cut after Saturday’s second round effectively ending his season. On the bright side, at least he’ll have more time to spend with his family!