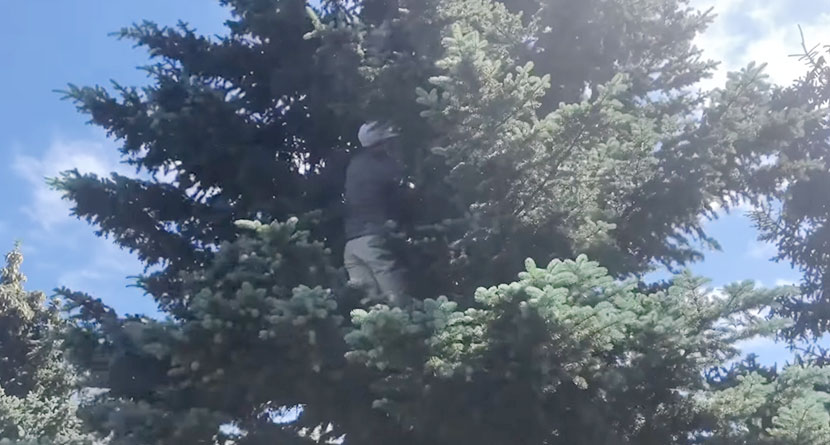 As everyone who plays golf knows, the golf gods can be cruel sometimes. No one knows this better than Ryan Werre right now.

At the Alberta Men’s Mid-Amateur in High River, Alberta at the Highwood Golf and Country Club, Werre held a two-shot lead over the field as he stood on the 18th tee.

Then one missed fairway changed everything for him.

After missing the fairway right, Werre tried to take on the trees and get the ball somewhere near the green, but he misfired and took the trees head-on… literally.

He hit his second shot into the trees and his ball never came down. So instead, he went up.

THIS IS THE CRAZIEST GOLF MOMENT I’VE EVER FILMED!

Ryan Werre 2 shot lead on 18 but his 2nd shot went 40-Feet up a tree, he raced up to find it, never did, was exhausted, shot a 9, lost the provincial Mid Am.

Werre climbed up the tree to try and retrieve his ball. He wanted to expand his relief options and in the rule book, if he could identify his ball, he could earn relief under Rule 19.2c or back-on-the-line relief, under Rule 19.2b.

If he couldn’t identify his ball, he would be forced to take the much more penal stroke-and-distance relief option, under Rule 19.2.

However, he looked for his ball for the three minutes that he was allowed and shook all the tree branches that he could and came up short, never being able to identify his specific ball.

He took the penalty and hit his fourth shot. He ended up carding a quintuple bogey and taking a nine, finishing in a tie for fourth after holding a two-shot lead on the 18th tee.

Jesse Galvon parred the hole and ended up being the benefactor of Werre’s bad luck, winning the tournament and overcoming the two-shot deficit on one hole.

“The craziest finish I’ve ever seen in person,” Galvon told Alberta Golf about the hole and finish. “I don’t know if there’s a crazier finish that people know of. It was a whirlwind. It was a very interesting last hole.”

“I just went up to him at the end and said, ‘I know there’s nothing I could say to make you feel better. I’m sorry. You played well all week and things happen,’” Galvon added. “But he handled it really well. I think almost anyone else would’ve been more upset.”

Remember this one next time you get a bad lie in the rough.