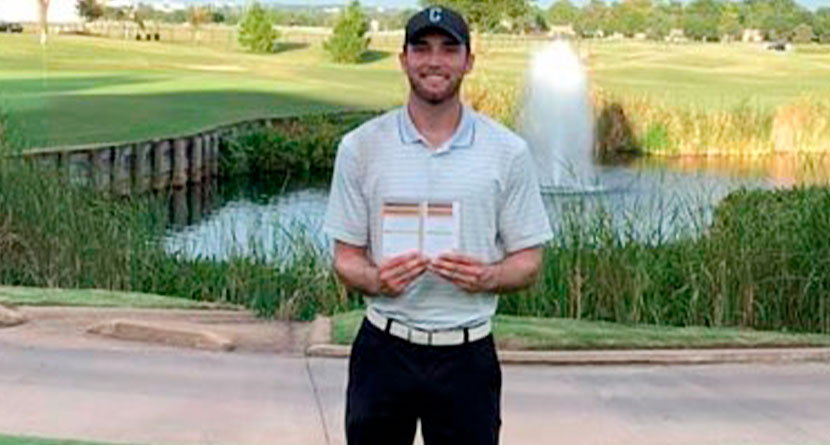 It’s a tough conversation to have.

How do you walk into a pro shop after the best round of your life — the best round of any life ever, apparently — and tell the pro behind the counter that not only you broke the course record, but you also tied the world record?

That was the question former Division II golfer Zander Hughes was pondering last week at South Lakes Golf Course, a 6,413-yard, par-71 course in Jenks, Oklahoma after he fired a 16-under par 55, which included an ace, two other eagles and 10 birdies.

“I really didn’t know how to start that conversation,” Hughes told Golf.com. “When I walked into the clubhouse, ‘OK, I’m about to tell him I shot a 55.’ Even at South Lakes, they’re going to be like, ‘No chance.’

BIG NEWS: Alexander Hughes ties world record for lowest round in golf history with a score of 55(-16) at South Lakes Golf Course in Jenks, Oklahoma.

The other 55(-16) was shot by Rhein Gibson at River Oaks Golf Club in Edmond, Oklahoma. pic.twitter.com/l5gYUr1KU2

Hughes, who showed up as a single and was paired with three others, wasn’t keeping his score originally. A 14-year-old name Grant was keeping track, however, and after Hughes turned in 9-under par 26 (!), Hughes said his scorekeeper was “freaking out.”

“At that point, shooting 26 on the front nine, I was thinking this is starting to get a little absurd.”

Hughes’ ace came on the second hole, a 155-yard par-3, and was bookended by a pair of pars, the only two he made on the front nine. He turned and only managed a pair of birdies in his first five holes on the back before he finished with a flurry — eagle, birdie, birdie, birdie — to shoot 29 on the inward nine.

His 55 was the course record by four shots, and it tied the world record, according to Guinness, which happened to have been set 90 miles away by PGA Tour pro Rhein Gibson.

Hughes, who played collegiately at Central Oklahoma, was able to convince the clubhouse that he had indeed shot 55, and after some paperwork and a complimentary beer, he was able to add some perspective to his world-record score.

“To do that on any golf course and record that score, it’s just pretty mind-blowing,” he said. “It gives you a lot of confidence. It gives me a lot of confidence. I always had that belief that I could maybe pursue golf as a career. Golf is such a mental game – you fight yourself all the time thinking if you can do it or if you can’t do it. Pretty much what this does is it’s just a positive boost that I can do it.

“It’s remarkable to be on such a short list of people who have shot in the mid- to upper-50s. It’s incredible. I’m just blessed to be able to shoot a score like that and be a part of history in some sort of way. It’s very humbling.”

With aspirations of playing golf professionally, Hughes will be able to show up at any tournament he ever tees it up at again knowing he has what it takes to go low — literally as low as anyone ever.