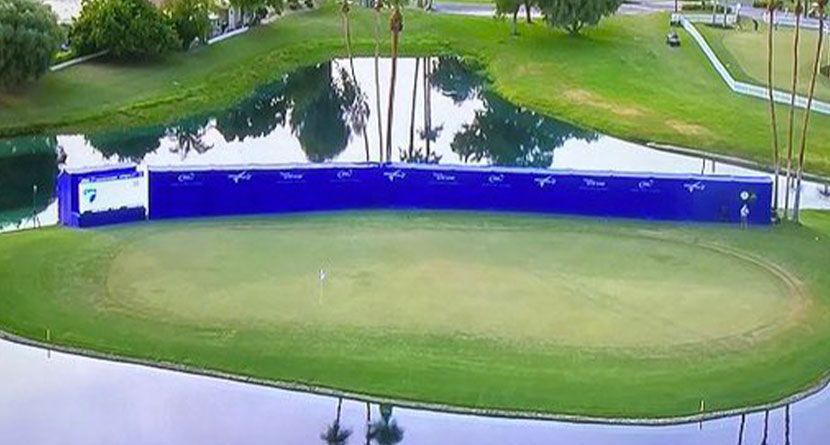 A thrilling finish and clutch performance by Mirim Lee down the stretch to win her first major championship at the ANA Inspiration is being overshadowed by an arbitrary piece of infrastructure erected behind the 18th green at Mission Hills Country Club’s Dinah Shore Tournament Course.

The 18th hole, a risk-reward par-5 that features an island green was transformed into green fronted by water and protected behind it by a large blue wall that seemingly served little purpose except for keeping shots that were destined to find the penalty area dry.

Without fans in attendance, the LPGA Tour erected what Golfweek.com’s Beth Ann Nichols dubbed “The Great Wall of Dinah,” behind the green in an effort to replicate the play conditions of previous years where a grandstand is usually erected.

Instead, the wall took a great deal of strategy out of play and eventually had an impact on the outcome of the event.

As you can see, the Great Wall of Dinah is longer and closer to the green than the usual grandstand.

Would’ve been great to see it as the members do. pic.twitter.com/c3YB17CRo1

Aside from its increased length and closer proximity to the green, the question becomes why it was needed? And those questions were only amplified as Lee came down the 18th hole at 13-under par and trailing Nelly Korda and Brooke Henderson, likely needing an eagle to have a chance at a playoff.

“I definitely thought to utilize the back and the backboard,” Lee said after opting for 5-wood over her 4-iron. “When I had practice rounds, I had practiced that shot, so it was a definite for me to use the space there.”

By no fault of her own, Lee took advantage of the layout then clutched up to knock in the chip for eagle to force a playoff.

Mirim Lee chips in for eagle on the 18th to take a share of the lead at 15-under‼️@GolfChannel | @ANAinspiration pic.twitter.com/Lss2cPNOBK

That’s when things started to really get hairy. Henderson, playing alongside Korda, also used the wall to her advantage, getting up-and-down for birdie to tie Lee at 15-under par. Korda failed to make birdie, unable to go for the green after a drive into the rough, while the other two players used the artificial barrier to their advantage.

“Without that being there we probably have to lay up because none of your long clubs are going to hold the green – it’s too firm.”

Once Lee was able to win on the first hole of the playoff, one of Korda’s high-profile South Florida golf friends, Justin Thomas, didn’t mince words.

Cost @NellyKorda a major! Such a bad set up on the last hole of a major

And on the broadcast, the usually reserved Judy Rankin put the decision into proper perspective.

“The fact is, it has been way too artificial,” said Rankin. “There was no real reason for it to be there. There were no spectators, or clients or anything like that. And it has affected play way too much.”