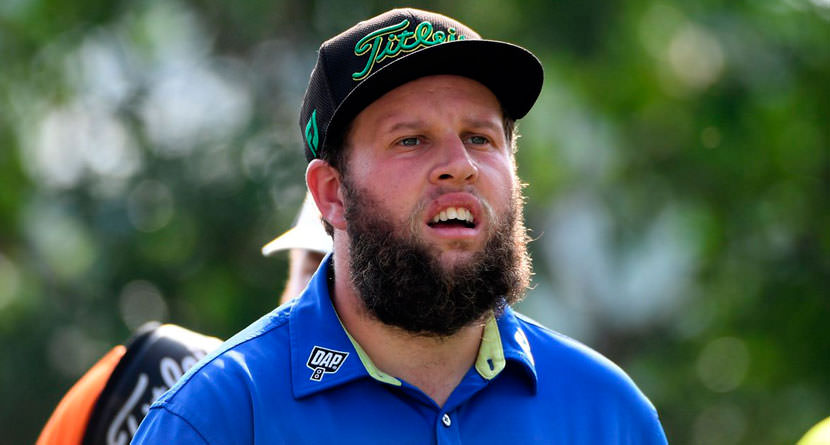 Golf is a fleeting game. Some days you can’t miss the center of the club face and other days you can’t find it. This week at the PGA Tour’s RSM Classic, Andrew “Beef” Johnston was having one of those weeks.

After opening the tournament with a 3-over par round of 75, Beef struggled his way to a second-round, 5-over par 77. However, en route to his missed cut, Johnston lightened his caddie’s load on the back nine.

Golfweek.com’s Jeff Babineau had details from the ground.

Englishman Andrew “Beef” Johnston felt as if his game was in good shape heading into the RSM Classic, and he had some high hopes.

Instead, he struggled miserably for two days, shooting 75-77 and missing the cut by miles in his final PGA Tour start of the season. It ended a frustrating 2017, during which his best showing was a tie for 10th in Puerto Rico.

It was enough to make a man snap, which, on the bright side, would end up making one veteran photo snapper’s day.

Johnston tugged a tee shot with a 3-wood into the native area on the left side of the par-4 fourth hole on Seaside (his 13th of the day), and his club wasn’t very far behind the golf ball. He angrily helicoptered it into a marshy area, presumably never to be seen again. (He’d go on to make triple bogey on the hole.)

Eventual tournament leader Austin Cook, playing an adjacent hole, watched the whole scene unfold and had a relatively good idea where Johnston’s club toss came to rest; he tossed a ball in the general direction, leading PGA Tour photographer Stan Badz to wade in and fetch it. At first, when Badz saw the reeds of wild native grass laying down not far from the club, he thought it meant a gator could be nearby. But he found the club, and when Badz went to return the Titleist 3-wood to Johnston, Johnston did a gracious thing: He told Badz to keep it.

“Yeah, I lost two clubs today, a 3-wood and a 9-iron,” Johnston said. “I chucked the 3-wood in there (into the marshy area) and obviously I shouldn’t do it … but I was just … it broke me today. It really did. It was one of those things, it just broke me.

When Johnston teed off on the next hole, he then realized he still had the headcover to the 3-wood. So he walked over and gave THAT to Badz, too.

“It was the least I could do,” Johnston shrugged.