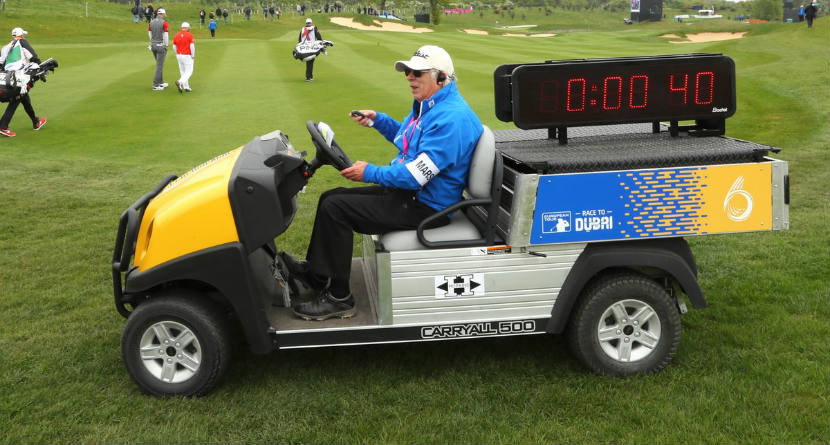 Everybody thinks they have a remedy for slow play epidemic that is plaguing the game, especially at the professional level. However, two pros in particular, think theirs is foolproof, and it seems fairly simple: name and shame.

Speaking on Sunday after the European Tour’s innovative Golf Sixes team event which introduced a 40-second shot clock (reduced to 30-seconds as the event progressed), the English team of Andy Sullivan and Chris Wood said they’d prefer one-shot penalties called on themselves to speed things up.

“Personally, I just think they need to be stricter with it on the Tour,” Sullivan said, according to a Golfweek report. “This week, everyone was quicker because they knew as soon as it (the shot clock) went to zero, they were getting a shot penalty. Whereas in a normal event, you’ve got that little bit of leniency.”

English golfers at #GolfSixes like shot clock, feel players need to be named and shamed for slow play: https://t.co/GXOEHS0RY4 pic.twitter.com/lJTCMrVRk1

“Someone got done (penalized) yesterday, and he’s probably humiliated today,” Wood said. “I think that’s quite a lot to do with it, the naming and shaming. Sully is right, there’s too much leniency. Players are to blame, hold your hands up there, but referees can be stronger on occasion.”

Being that there was only one penalty doled out over the course of two day means that professional golfers are capable of playing quickly. What a crazy notion, right?

“It proves everyone can play that quickly,” Sullivan said.

But according to Wood, the key is to enforce the penalty instead of threatening it.