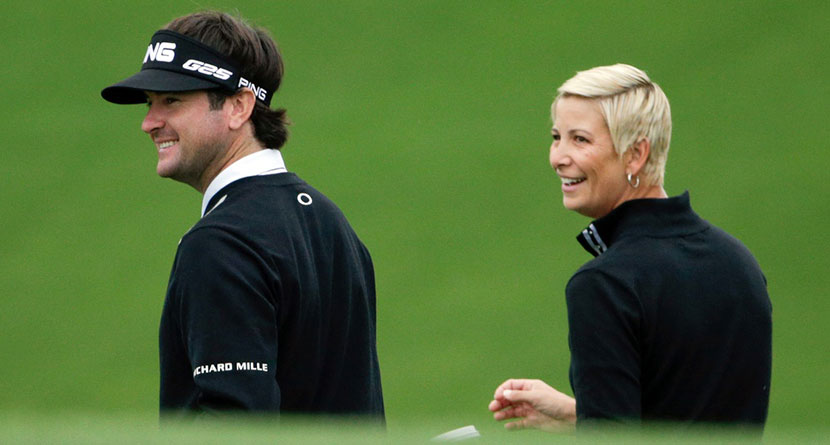 Whatever your opinion on LIV Golf, there’s no question the new professional golf option has become a safe landing spot for players on the back side of their career.

With signing bonuses, team competition and guaranteed paychecks, Phil Mickelson, Ian Poulter, Pat Perez, Charles Howell III and others are set to make more money in their 40s (and 50s) than they could have hoped to earn on the PGA Tour or Champions Tour.

Two-time Masters champion Bubba Watson became the latest 40-something to commit to the LIV Golf Series, announcing last week his decision to join the venture, which is backed by the Saudi Arabia Public Investment Fund.

In case you missed the broadcast… pic.twitter.com/G9PLQR0ntm

“My wife loved it, we prayed about it, we came to the decision and here we are,” Watson said last week prior to the LIV event at Trump Bedminster in New Jersey.

LPGA golfer Angela Stanford, a two-time major winner, took to Twitter to voice her opinion on the decision Watson reached with his wife Angie, a University of Georgia graduate and former WNBA player.

“Most educated women, like your wife, wouldn’t love taking money from a country that suppresses women,” Stanford wrote.

Most educated women, like your wife, wouldn’t love taking money from a country that suppresses women. https://t.co/lFcxhO4Xub

Opponents of the LIV series cite Saudi Arabia’s poor record of human rights and the treatment of women. Pros who have joined LIV recently believe the country is making progress in those areas.

“I’ve been there, and I’ve seen change, and I’ve talked to the people there,” Paul Casey said last week prior to his LIV debut. “I played with a young girl in the pro-am at the Saudi (International) earlier this year, 17 years old. I played with her father. I played with another lady who’s a human rights lawyer.

Saudi funding could become a reality soon for Stanford and her LPGA peers. LIV commissioner Greg Norman has expressed interest in adding women professionals to the series in an effort to help grow golf globally and LPGA Tour commissioner Mollie Marcoux Samaan is open to those conversations. LPGA players generate only a fraction of the earnings of their male counterparts, lagging behind in tournament purses and sponsorship opportunities while facing similar expenses.

Watson turns 44 in November and last won on the PGA Tour in 2018. The 12-time PGA Tour winner underwent surgery to repair a torn meniscus in his knee in June and is not expected to return to the course until 2023. He will serve as a non-playing captain at the next tournament, scheduled for Sept. 2-4 in Boston.