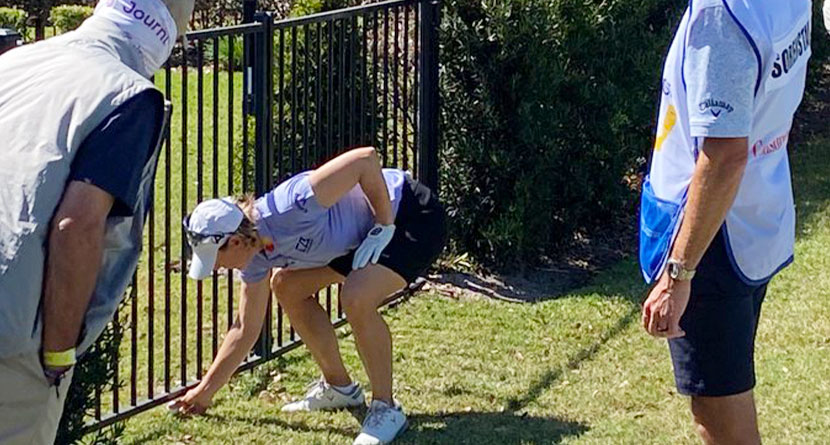 Annika Sorenstam competed on the LPGA Tour this past weekend for the first time as a competitor in over a decade.

The 72-time winner opted to play in the Gainbridge LPGA in large part due to the fact that the course hosting the event, Lake Nona, was in her backyard – literally; she lives on the course. However, it was a neighbor’s backyard that was the story of the weekend for Sorenstam.

Playing the fourth hole during her first round, Sorenstam hit a wayward tee shot that came to rest underneath a fence. Calling in a rules official, Sorenstam and the official deemed the ball to be in-bounds, but the fence forced Sorenstam to take an unplayable lie drop.

Sorenstam would go on to make a triple-bogey en route to an opening-round 3-over par 75, but after the round, officials got together and determined the wrong advice was given to Sorenstam.

Where her ball came to rest under the fence was actually a gate that could have been opened to allow her to play from there, or under the new modernized rules of golf, allowed for a free drop as the fence and gate are not considered integral under the definition of an immovable obstruction.

Regarding the Ruling given to Annika Sorenstam on the fifth hole during the first round of the 2021 @GainbridgeLPGA:

The official on scene linked the word “integral” to the gate, meaning that it could not be moved. (1/3)

The option to rescind the penalty is not available under the Rules of Golf. The official met the player immediately following her second round to explain the mistake and apologize. (3/3)

“The option to rescind the penalty is not available under the Rules of Golf. The official met the player immediately following her second round to explain the mistake and apologize.”

Sorenstam was gracious in her acceptance of the incorrect ruling.

“He said ‘This is going to hurt me. This is eating me inside,’” Sorenstam after a second-round 71 that put her on the cutline number. “I said, ‘Please, please don’t feel that way. I appreciate it.’ He said, ‘I won’t make that mistake again.’ I said, ‘Well, I won’t hit there anymore.’”

Sorenstam said had she been allowed to, she wouldn’t have taken the free drop and would have opted to play the shot from the open fence.

In the end, it didn’t end up costing the World Golf Hall of Famer. She made the cut and played the final two rounds in 11-over par to finish in 74th place, last among those to make the cut.