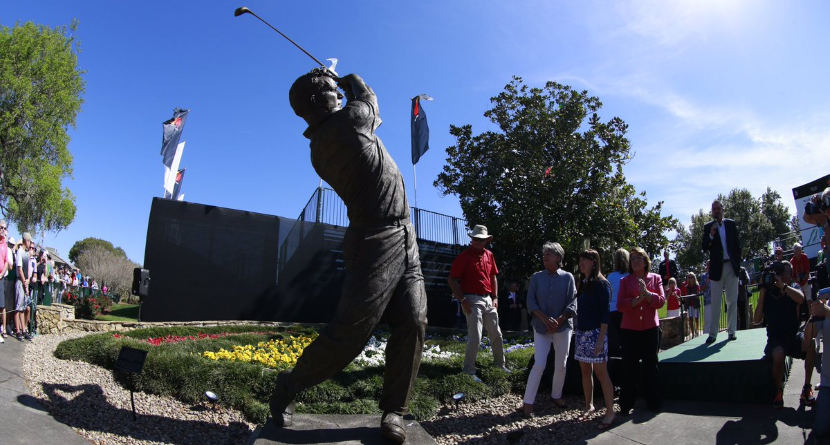 The PGA Tour heads down I-95 this week to Bay Hill Club and Lodge in Orlando, Florida for the Arnold Palmer Invitational presented by MasterCard. This year marks the first time the event will be played since the King’s passing and it promises to be an emotional week for everyone involved. However, some of the world’s top players will not be in attendance, and it has become a heated subject of debate.

While the field will still contain the likes of Rory McIlroy, Jason Day, Hideki Matsuyama and Henrik Stenson, on the flip side, it’ll be without current world number one Dustin Johnson, Jordan Spieth, Adam Scott, and Phil Mickelson. In all, only 29 of the top 50 players in the world are in the 120-man field. As Golf Channel’s Cara Robinson pointed out:

Only 10 of the world’s top 25 golfers are currently committed to next week’s @APinv (49 of the top 50 played @WGCMexico last week) #TheKing https://t.co/2HZZzTmvBu

The glaring issue is scheduling. You see, the Arnold Palmer Invitational falls between two expensive WGC events – two weeks after the WGC-Mexico and the week before the WGC-Dell Technologies Match Play. Not to mention the fact that the Masters is played only three weeks afterward, which everybody has circled on their calendars. Most pros’ schedules are typically set up well in advance for a variety of reasons, such as sponsorship obligations, course preference, family responsibilities, rest, etc. Bottom line, some events are just not feasible to attend.

Disappointing. Totally understand schedule issues. But 1st year without AP. Honor an icon! Without him wouldn’t be in position we are today https://t.co/yzaIqbbSpM

While it is up to the individual to decide what events are on their schedule or not regardless of the reason, sometimes conflicts are inevitable, as pointed out by two-time winner this season, Justin Thomas:

Would love to, for The King and it’s a great golf course. One of my college teammates and best friends getting married that weekend https://t.co/w8A1tBFko7

According to a Golf Channel report, Ernie Els, who will be in the field at Bay Hill, summed it up the best. “We all absolutely respect what Mr. Palmer did, but I get the guys that just can’t play that week,” he said. “You’ve got certain priorities that you have to try to meet, and some of the guys just can’t do that. So you’ve got to take that for what it is. It’s no disrespect to Mr. Palmer.”