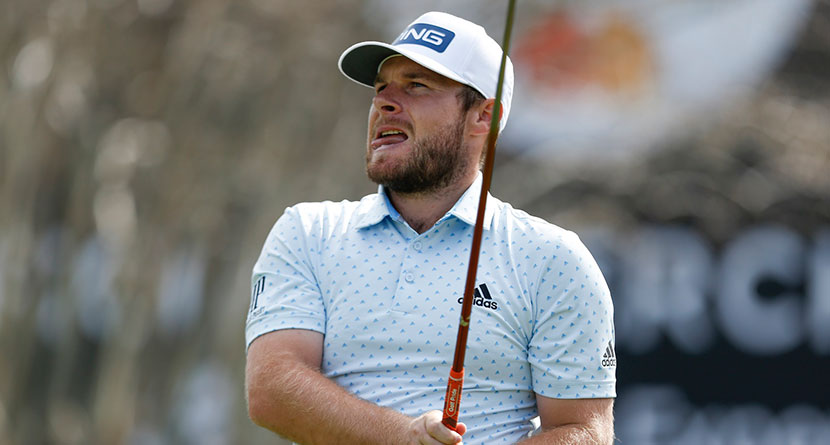 England’s Tyrrell Hatton is one of professional golf’s most entertaining players, and that is only partially because of his incredible talent.

The eventual champion of this week’s Arnold Palmer Invitational put his entire arsenal on display over the course of the final round on Sunday that led to a one-shot victory over Marc Leishman.

In brutal conditions, Hatton fired an even-par front-nine to open up a three-shot lead as he turned for home at Arnold Palmer’s Bay Hill Club and Lodge. However, those testy conditions got to the 28-year-old known to have a bit of a short fuse at times.

After hitting his tee shot on the par-4 into the water left of the fairway, Hatton hit his third shot over the back of the green, and tried to play a delicate shot back towards the water that only made it to the back fringe. From there, Hatton hit an uncommitted put — what he would call in his champion’s press conference “a rip pull.”

Leaving himself with a “smelly” six-footer for double bogey, Hatton let a few of his emotions loose as he used his putter to simulate a shotgun before flipping the bird back towards the tee.

Tyrrell Hatton with the shotgun to middle finger move at the @APinv pic.twitter.com/vIAeKNLYtW

“I was just annoyed because my third shot in was actually one of the best swings I made all day,” Hatton explained. “I’ve hit a 5-iron at my target and the wind just completely dropped. So that kind of went against us on that hole and I was just having a little moan, like it’s the grass’s fault and the wind’s fault. It’s never my fault.”

Hatton was able to coax in the putt for double-bogey and gave the hole one final parting gesture.

Another rude gesture for the lake by Tyrrell Hatton pic.twitter.com/B2BJRyQ7e8

Hatton was able to right the ship with the help of his caddie, Mick Donaghy.

“(Mick) was really good,” Hatton said. “He just told me to kind of get focused again, it’s done, move on, and have a few practice swings and just kind of get some good feelings again. And I stood on the 12th tee and that was probably one of the best tee shots, certainly, that I hit today.”

Hatton played even-par golf the rest of the way in, and while he did his part, the difficult course conditions did enough to keep Leishman and a charging Sungjae Im at bay. Both of the chasers made errors down the stretch that allowed Hatton to keep his advantage and win his first PGA Tour event.

“It’s an incredible feeling to win on the PGA Tour and to do it at such an iconic venue that I’ve grown up watching this event as a kid on TV and to be sitting here next to the trophy now is an amazing feeling and very thankful I managed to hold on at the end,” he said.

The win gives Hatton a three-year exemption on the PGA Tour, which is stability he hadn’t previously had coming into the week.

“Coming into this week I didn’t have any exemptions, so when the season starts you are kind of just playing to keep your status for the following year,” he said. “Obviously, I’m trying to juggle both tours, which is never easy. So to wrap up (that exemption)… that’s amazing. I kind of know where I’m at now for a while, which is great, and hopefully, I can push on and keep climbing the FedExCup.”