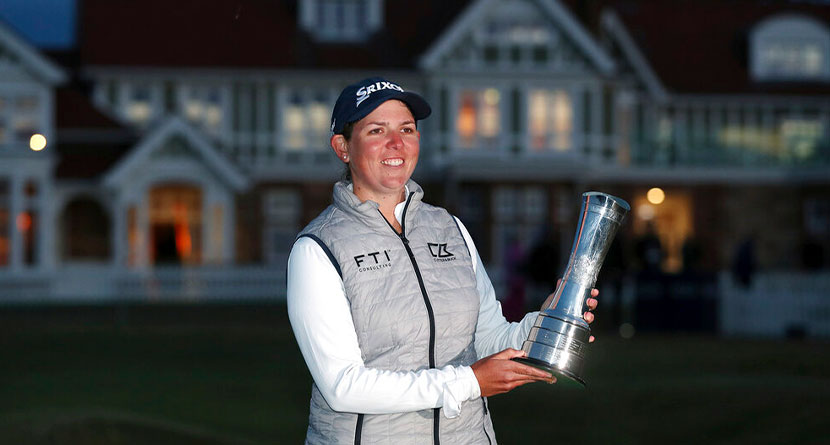 MUIRFIELD, Scotland (AP) — After seeing a five-shot lead slip away in the final round, Ashleigh Buhai still managed to secure a first major title at the Women’s British Open.

Buhai kept her composure to beat In Gee Chun — and the setting sun — in a playoff at Muirfield on Sunday for her first career victory in an LPGA Tour event.

With the light fading, the South African golfer made a superb bunker shot on the fourth playoff hole to leave herself with a short par putt, while Chun settled for a bogey.

The 33-year-old Buhai calmly rolled in from less than three feet and then clutched her face in relief, before being drenched in water and other beverages by her entourage.

Look at what it means!

An incredible up and down seals victory for Ashleigh Buhai#AIGWO pic.twitter.com/Qd2j59891Q

“I was surprisingly calm,” Buhai said about the clutch bunker shot that secured the victory. “My caddie said to me on the last one, I don’t want to brag, but she said ‘Show them why you’re No. 1 in bunkers this year.’ So, you know, she gave me the confidence. Maybe it’s got something to do with Muirfield and South Africans and bunker shots.”

Ernie Els also won the men’s British Open in a playoff at Muirfield in 2002 after a memorable bunker shot during the final round. This was the first time the Women’s British Open was played at Muirfield, a club that didn’t even allow female members until 2019 following a vote two years earlier.

Buhai made things a lot more difficult than they had to be, though.

She entered the final round with a commanding five-shot lead and was still three strokes ahead before a triple bogey on the par-4 15th that put her level with Chun.

Both players missed long birdie putts on the 18th as they settled for a playoff after finishing on 10-under 274.

“I know there are a lot of people in South Africa with lots of gray hairs right now after that 15th hole,” Buhai said. “But I’m very proud of myself, the way I dug deep and kept myself in it to get into that playoff.”

Hinako Shibuno of Japan, the 2019 champion, finished one shot back in third after missing a chip from just off the green that would have made it a three-way playoff.

Chun was in trouble on the first two playoff holes, but her short game bailed her out both times.

On the first, Chun sent her second shot into a bunker while Buhai found the heart of the green. But the South Korean hit a near-perfect bunker shot to within a few feet of the hole to salvage the par.

On the second, she needed to make an 8-foot bogey putt to stay in it after sending her second shot wide and then barely making it onto the green with a chip from the tall grass.

Buhai nearly won it on the third playoff hole, but her long putt for the win pulled up a few inches away from the hole.

For Buhai, the win more than made up for a near-miss at that 2019 Women’s British Open, when she led the event at the halfway stage at Woburn but finished fifth.

“Forgive me, there will be a few tears,” Buhai said during the trophy presentation. “Obviously there’s a lot of hard work and many years of dedication going into this.”