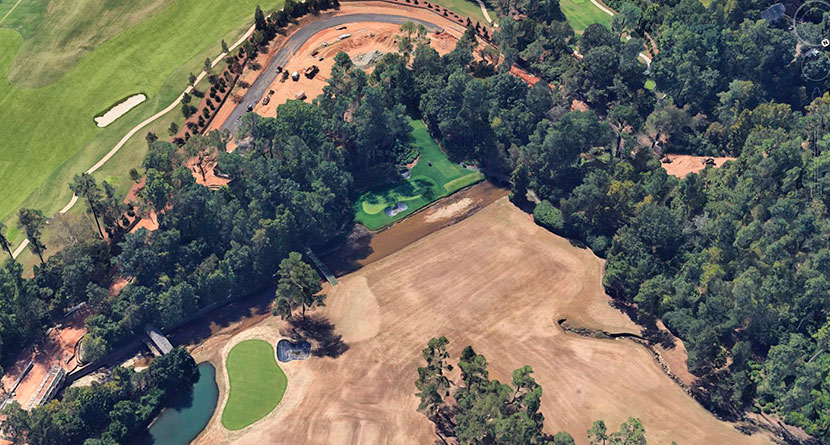 An intrepid golf fan stumbled across some recently-updated aerial pictures of Augusta National Golf Club from Google Earth, and the course looks much different than any other time you’ve likely ever seen it.

Lou Stagner, a self-described “golf nut” and “data nerd,” unearthed the images of the browned-out off-season home of the Masters over the weekend, and golf’s internet sleuths had a field day.

Aside from the shocking visual of a brown Augusta National with black bunkers, a handful of things stood out — as documented very well in this Dylan Dethier Golf.com piece — but the lion’s share of attention went down to Amen Corner where something interesting appears to be taking place.

This is so cool looking!

Just went on google earth to look up something at Augusta.

It appears the google satellites captured Augusta in the middle of some renovations.

Check out behind 13 tee. pic.twitter.com/0ohAJpEebV

The photos, which were taken in September, show a new maintenance road behind the 13th tee as well as what could very well be space for a new tee for one of the easiest par-5s on the course.

Is Augusta National’s famous 13th getting a new back tee for this years Masters ? … or is it just the new road round the course? Interesting ? #kenonthecourse pic.twitter.com/K4Vn5V8nmw

According to a fantastic explainer from someone who knows the course, history and tournament very well — Scott Michaux, formerly of the Augusta Chronicle — the much-talked-about lengthening of the 13th hole seems to at least have the groundwork being laid.

The land in question was purchased from neighboring Augusta Country Club in 2017 for $30 million, which gave ANGC a secure perimeter around Amen Corner. As Michaux points out, Fred Ridley, the chairman of Augusta National, has hinted at this change since he took over in 2018, and he explained the club’s stance further during his pre-tournament press conference each of the last two years.

“There’s a great quote from Bobby Jones dealing specifically with the 13th hole, which has been lengthened over time,” Ridley said before the 2018 Masters. “He said that the decision to go for the green in two should be a momentous one. And I would have to say that our observations of these great players hitting middle and even short irons into that hole is not a momentous decision.”

Ridley doubled down on the inevitable lengthening of the hole last year as well.

“It should come as no surprise to any of you that we continue to study other enhancements to the golf course; that includes much‑talked‑about changes, potential changes, to the 13th hole,” Ridley said last April. “Admittedly, that hole does not play as it was intended to play by Jones and (Alister) MacKenzie. The momentous decision that I’ve spoken about and that Bobby Jones often spoke about, of going for the green in two, is to a large extent, no longer relevant.

“Although we now have options to increase the length of this hole, we intend to wait to see how distance may be addressed by the governing bodies before we take any action.

“While there’s no hesitation on my part or historically on the part of Augusta National to make changes that are necessary – that’s been observed through the years – Amen Corner is a sacred place in the world of golf. I am hesitant to move too quickly in that regard. My preference, as I stated, would be to see what happens, what the governing bodies decide is best for the game, and then we will take appropriate action in response to that.”

Thanks to Google Earth we can see the changes coming to 13 tee at Augusta National. Safe to say it'll be playing a bit longer. ? pic.twitter.com/fjuM2g070K

When the hole will be lengthened —whether it be for the 2020 edition or at a later date — is unclear, but the fact that the hole is able to be updated to challenge the modern Tour pros and make going for the green in two a more “momentous decision” is no longer deniable.