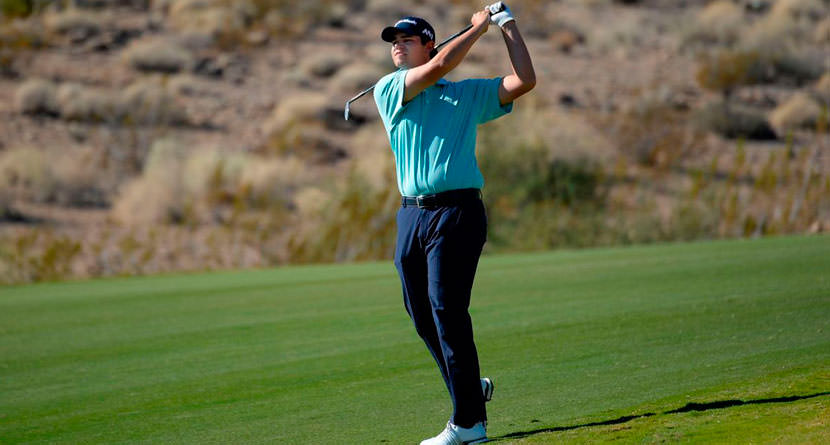 Beau Hossler fired a second-round 4-under 68 and will take a one-stroke lead into the weekend at the Houston Open.

The former University of Texas star offset his lone bogey with five birdies, highlighted by three-straight gains on Nos. 8-10, en route to a two-day total of 11-under par 133.

“It’s been great. I’ve taken advantage of a lot of easy holes out here and I’ve played the tough ones pretty well, so I think I managed only one bogey thus far,” said Hossler, whose best career finish is a T7 in Las Vegas last fall at the Shriners.

“I’ve hit a lot of quality shots and feel like my game’s in a good place.”

“Definitely happy with where we’re heading,” said Fowler, who has yet to miss a cut in seven starts at the Houston Open.

One further back at 9-under par was Jordan Spieth, who posted a second-day 67 to sit T6.

Spieth was cruising along bogey-free at 6 under par through 15 holes, but a bogey on the par-3 16th left a blemish on an otherwise perfect round.

“I thought today was a step forward from yesterday. It’s a round that could have been really special, but I don’t have to have an 8 or 9 under round,” said Spieth.

“I feel like my game’s in form and that’s really cool. I’m having a lot of fun out there.”

After a first-round 73, Ian Poulter shot a low-round 64 on Friday to move into contention at 7-under par. Poulter is one of several high-profile players who need a win in Houston to get into the Masters.

“Yesterday was a frustrating day on the golf course, didn’t really get anything going when it was flat calm conditions. And then obviously today contrast, we had a completely different wind to what we had yesterday and I rolled the ball real nice,” said Poulter, who finished bogey-free with eight birdies.

“So when you’re doing that and hitting good shots to take advantage of a couple par 5s then without any mistakes, you can actually post a decent out here.

“64’s a good number, back in the mix and hopefully I have a really good weekend.”

The Englishman sits T23 along with compatriot Justin Rose (69) and Argentinian Emiliano Grillo (68).

Despite a triple bogey on the 18th hole, Phil Mickelson carded a 1-under 71 on Friday. The 47-year old legend headlines a logjam of 15 players at 5 under, one-shot clear of defending champion Russell Henley (71) and Brandt Snedeker at 4-under par.