Behind The Stripes: How One NHL Ref Competes Off The Ice 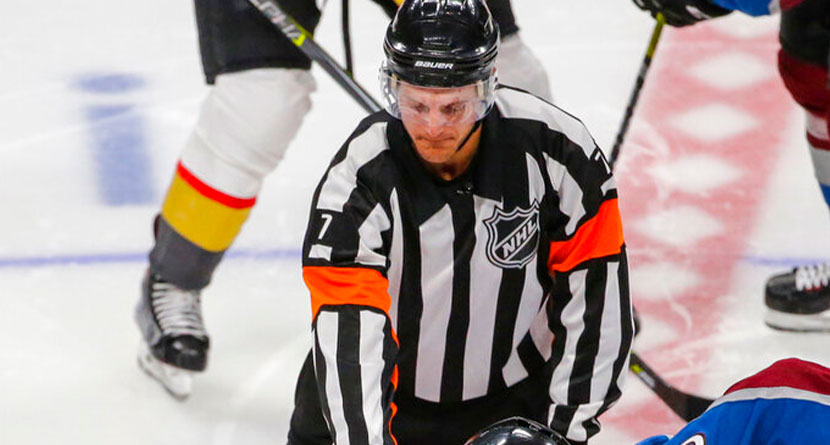 It has been almost three decades since the NHL took the names off the back of officials’ jerseys and replaced them with numbers.

Since then, with the notable exception of Wes McCauley and his popular, flamboyant calls, most referees and linesmen generally fly under the radar and don’t mind the relative anonymity.

But it’s their lives away from the rink that humanize them to players and coaches, by building rapport and helping games go smoother.

“It’s huge,” referee Garrett Rank said. “It kind of puts you in a light of, ‘Hey, this guy’s a normal human being.’ We like to say we get in the way of winning, so they’re kind of always being hard on us and it’s nice just to have a little bit lighter of a conversation.”

Rank is a mid-amateur golfer from Canada who qualified for the 2018 U.S. Open. Fellow ref Corey Syvret is a former minor league player who transitioned to a job he never thought he’d want. And linesman Ryan Daisy, fresh off working his first Stanley Cup Final, enjoys things away from hockey that can be the total opposite of working under the microscope on the ice.

Growing up in a small town in southern Ontario, Rank played hockey in the winter and golf in the summer. As an adult, he’s able to do the same thing — just replace playing with refereeing.

Rank wasn’t sure he’d be able to keep those separate passions going to this level: He has worked more than 450 NHL games and ranks 164th in the world among amateur golfers; he has reached as high as 34th.

Limited to eight to 10 rounds of golf during the hockey season, Rank identifies 70% as a referee and 30% with his other sport.

“I’m fortunate enough to have a net and kind of a half-simulator in my garage, so I hit balls a bunch in there when I’m home,” Rank said. “In the summer I play golf every day.”

Rank finished fifth at the Crump Cup Memorial Tournament at Pine Valley in New Jersey. In 2012, he was one match at the U.S. Mid-Amateur Championship from earning a spot at the Masters.

In between, Rank commuted between Hershey, Pennsylvania, for the American Hockey League’s Calder Cup Final and the U.S Amateur Four-Ball Championship in Mamaroneck, New York, in 2016. He laid his referee gear out under his car to dry at prestigious Winged Foot Golf Club and worried he’d be asked not to return, but he and partner Patrick Christovich actually reached the semifinals.

As recently as this past spring, Rank was pulled off the course five holes into a U.S. Open qualifier to serve as the standby official for Game 1 of the second-round playoff series between Colorado and St. Louis.

“In officiating, we get one look at it in really high speed and you have to make a decision and be really decisive,” he said. “And then I think just the pressure situations that come with being in a big hockey game or playing in a big golf tournament: just being susceptible to that for the whole year.”

It also helps to have something outside hockey to talk about with avid golfers like Washington’s T.J. Oshie, Dallas’ Joe Pavelski and Vegas’ Mark Stone. He said golf comes up every game he works.

“There’s always one guy that loves golf on each team, and they’ll always swing by and ask me if I played that morning or if I’ve been playing or any good results in the summertime,” Rank said. “I’ve kind of gotten to know the guys that like golf. I make it a point to use it to my advantage, kind of just to build some rapport and have a relationship with some stuff away from the hockey rink.”