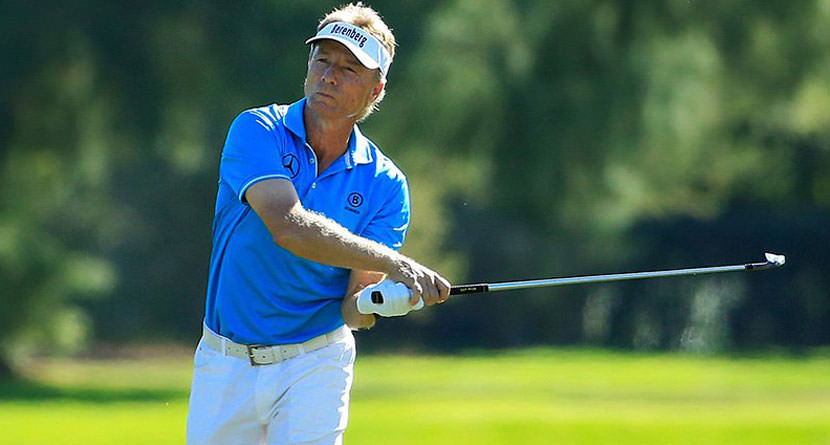 2017 was a banner year for Bernhard Langer. The 60-year-old German racked up seven wins in 22 starts to go along with 21 top-20s and 16 top-10s. The man who walked away with the season-long trophy, Kevin Sutherland, had a solid year as well — 15 top-10s — but his only win came at the Charles Schwab Championship.

Langer finished tied for 12th at the Charles Schwab Championship.

Any system that allows someone else to win the season-long Schwab Cup clearly needs an overhaul.

Kevin Casey of Golfweek.com had more on the controversial ending to the senior circuit’s season.

The finish to the 2017 PGA Tour Champions season will certainly produce some chatter, as a surprise name took home all the accolades.

Kevin Sutherland fired a 5-under 66 Sunday at Phoenix Country Club for a one-shot victory over Vijay Singh at the season-ending Charles Schwab Cup Championship.

The points reset prior to the Charles Schwab Cup Championship, also the finale to the three-event Schwab Cup Playoffs, allowed any player in the top five in the standings to take the Schwab Cup with a win there. Sutherland entered the week fifth and took advantage, using the win to garner the Schwab Cup title – which brings with it a $1 million annuity.

But all of this leaves the circuit’s most dominant figure on the outside looking in.

Sutherland may’ve made a timely charge, but Bernhard Langer yet again was the dominant force all season on the PGA Tour Champions. The 60-year-old posted a new best in 2017, winning seven times this season.

He had five other top-three finishes and 16 total top 10s in 22 events. He led the Tour in top 10s as well as wins, with Scott McCarron a distant second with four titles on the season.

Langer entered the finale the leader in the standings and ready to capture his fourth straight Schwab Cup crown (and fifth overall). The reset made him vulnerable, though, and an opening 71 left the door wide open. Even closing 68-64 could only produce a T-12 showing this week for Langer, who dropped a spot to finish second in the Schwab Cup.

Overall, Langer failed to capture the Schwab Cup despite a season that included more wins than his last two Schwab-Cup-winning campaigns combined.

While Langer’s lack of a season-long trophy seems a little cheap, there plenty of defenders on both sides, including former FedEx Cup champion Billy Horschel who believes that under a true playoff system, there should be no guarantee of a winner.

So I guess the FedEx playoffs need an overhaul too then. Seeing as Dustin Johnson didn’t win the FedEx after the year he had in 2016. People should understand what the term playoffs mean. History has shown the best team or player doesn’t always win the crown jewel in the playoffs

What do you think? Let us know your thoughts in the comments below.