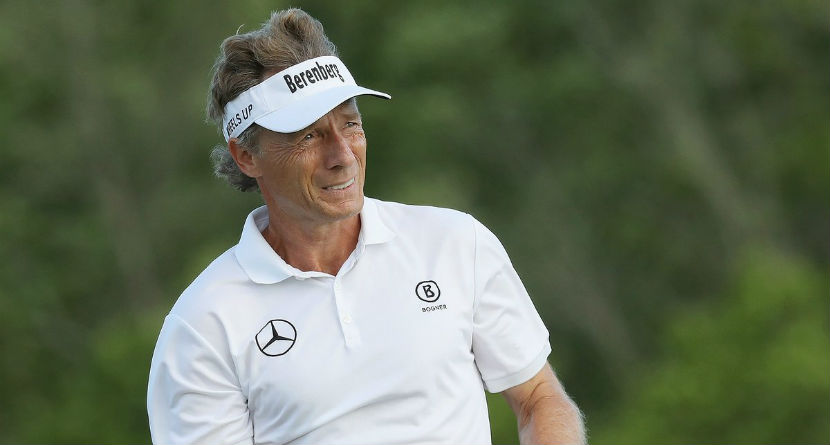 Nobody likes being called a cheater, Bernhard Langer especially. The 59-year-old German has been in the limelight recently for a couple of reasons, some good and some bad. The good is that he’s picked up two senior majors this year, which surpasses Jack Nicklaus’ previous record of eight; the bad is that many are questioning the legality of his putting method.

Ever since the anchoring ban took effect on Jan. 1, 2016, Langer has been under constant scrutiny for the way he rolls the rock. Golf Channel’s Brandel Chamblee even went so far as to say that the enforcement of the rule is “appalling”.

Speaking to The Telegraph on Wednesday at Senior Open Championship, Langer sounded off on the matter.

Hate us ’cause they ain’t us?

“I personally don’t understand it,” Langer said, “because I’m a man of integrity, and the last thing I want to do is break rules and be known for cheating. I’m not touching any part of my body, and I know I’m within the rules. I have conferred with the rules officials on a regular basis, and they have wholeheartedly said, ‘You’re not breaking any rule.’ You have a few people who question my integrity, which is really hurtful.”

The 59-year-old went on to express his “disappointment in some people” saying “we are all in the game of golf and should be discussing positive things.”

“The rule is actually very simple,” he said. “You can’t anchor. And I’m not anchoring. I haven’t anchored since January 2016.”

With three wins and more than $2 million in earnings this year alone, Langer has a simple explanation for the attention he’s receiving.

“It’s human to be jealous, let’s put it that way,” Langer said according to the report. “If I was 180th on the money list, I don’t think anybody would be talking about it. But I’ve been No. 1 the last few years.”

Langer will tee it up on Thursday at Royal Porthcawl in search for his third Senior Open title and his unprecedented 10th senior major win.