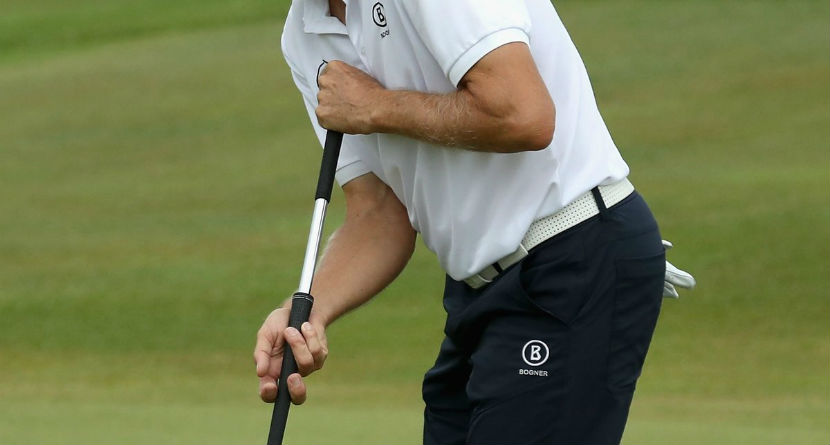 The anchor ban has had many critics since it went into effect back in 2016, with one of its biggest is Golf Channel’s Brandel Chamblee recently who went so far as to say that the recent enforcement of the ban is “appalling.” On Friday, two prominent PGA Tour Champions and the USGA issued statements refuting the outspoken analyst’s claims.

Both Bernhard Langer and Scott McCarron took the time to explain that although their long putters may graze their shirts on occasion, in no way are they violating rule 14-1b as interpreted by the USGA. Langer tops the PGA Tour Champions money list this year with two major wins. McCarron is a winner in his own right and currently ranks fourth on the money list.

‘I’m certain that I am not anchoring’ Bernhard Langer, Scott McCarron and the USGA responded to Brandel’s criticism: https://t.co/dmbcn3vd9U pic.twitter.com/GpAQBFTPhz

Langer: “During my 45-year career as a professional golfer, I have called penalties on myself. I believe in honesty and integrity, and I could not live with myself if I broke a rule and did not incur the penalty. I’m certain that I am not anchoring the putter and that my putting stroke is not violating the Rules of Golf. On several occasions, I have been in contact with the USGA and rules officials on the PGA Tour and PGA Tour Champions, and each time I have been assured that my putting stroke is within the Rules of Golf. I will remain open and honest with rules officials and the governing bodies, and I will continue to play with the same integrity that I’ve displayed throughout my career.”

McCarron: “I have putted with a long putter since 1991 – over half my life – and my putting stroke has not been anchored since the end of the 2015 season. I have logged more than 1,500 hours practicing without anchoring my putter, and the more I practice, the better I get. I’d like to emphatically say that I do not anchor my hand, arm or club against my body during my putting stroke. I have worked with the USGA and PGA Tour Champions rules officials to ensure that I am within the Rules of Golf, and I have extended many invitations to demonstrate and teach people how to use a long putter without anchoring. I have never competed dishonestly because I have the utmost respect for the game of golf, and I will continue to represent myself and the sport to the best of my ability.”

USGA: Over the last two years, the USGA has worked with the PGA Tour Champions and other professional tours to support education and adoption of Rule 14-1b. We are confident that Rule has been applied fairly and consistently and have seen no evidence of a player breaching the Rule, which does not prohibit a hand or club to touch a player’s clothing in making a stroke. Integrity is at the heart of the Rules and how the game is played worldwide, and this essential value has made the game enjoyable for all golfers. We will continue to work with our partners at The R&A to listen and review all of golf’s Rules, with an eye on making them easier to understand and apply.”