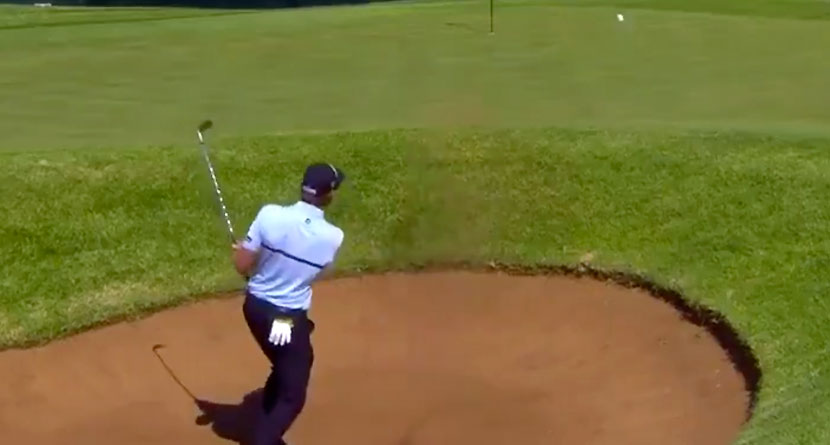 It’s not often that a shank is a good thing, but it turned out to be on Saturday at the Nedbank Golf Challenge on the European Tour.

Being contested at Gary Player Country Club in Sun City, South Africa, Denmark’s Joachim Hansen was trying to climb the leaderboard and the ladder in the season-long Race to Dubai with a solid third round when he found the greenside bunker on the par-4 6th hole.

Needing to throw the ball out to the right to let it feed down towards the hole, Hansen exposed the hosel a bit too much, which resulted in one of the most unexpected great shots of the year.

“Look at this, though,” another piped in. “This is unbelievable. This is the shot of the year… shot of all-time if it goes in. Oh my goodness me.”

Hansen was able to make the putt to save his par, but judging by his reaction, he was still upset with the shot regardless of how it turned out. He was able to take the momentum gained there and turn in a score of 1-under par 71 to put himself in contention at 6-under par through three rounds.

A poor Sunday, however, doomed his chances at a victory. While eventual winner Tommy Fleetwood would put together a 7-under par round of 65 to win in a playoff, Hansen went the other way shooting a 4-over par 76 to finish in a tie for 17th place.

Brutally, the poor final round dropped Hansen to No. 51 in the Race to Dubai standings with the top-50 earning entry into the season-ending DP World Tour Championship this week in Dubai.