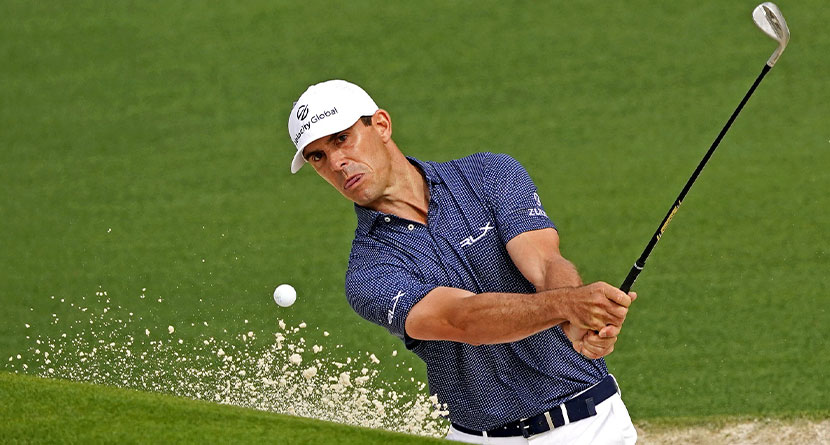 Coming off of a victory at the WGC-Dell Technologies Match Play, Billy Horschel’s expectations had to be pretty high heading into the first major championship of the season.

An opening-round 76 couldn’t have been what he was looking for, but a 1-under par round on Friday put Horschel through on the number for the weekend, and that’s when things really got interesting for Horschel.

Playing his third round, Horschel was 2-over par through 12 holes heading to the par-5 13th hole when his second shot from the pine straw failed to reach the green and rolled back into the tributary of Rae’s Creek.

With a doable lie, Horschel attempted to head down the bank sans shoes and socks to play the shot only to slip to the amusement of himself and playing partner Phil Mickelson.

Billy Horschel slips down the hill on 13. pic.twitter.com/K2Y4XWDuaa

The lighthearted moment was rewarded with a par save and a third-round score of 73. Things didn’t go quite as well on Sunday, however.

Even par for his round through six holes, Horschel hit a decent chip shot on the par-4 7th hole that ran out to five feet from the hole. Cameras then caught him repeatedly slamming his wedge into his golf bag.

This was Billy Horschel earlier in today’s round. pic.twitter.com/YOEYxYLiH8

Horschel would get up-and-down for par and even get under par on the day before coming to Amen Corner. He once again found Rae’s Creek on No. 13, this time off the tee, opting to attempt to play from the creek once again. It didn’t go as well as his attempt on Saturday, getting him hot under the collar en route to a triple-bogey 8.

On Sunday evening, Horschel apologized for the various instances that he allowed his temper to get the best of him over the weekend.

“I am and have always been a fiery competitor,” Horschel wrote. “Unfortunately, the fire inside me sometimes runs hot when I’m not getting the most out of my game. This leads to some instances where my conduct is not what I wish to show, especially as a role model to the younger generation.

“I apologize to Augusta National, the Members of the Club and to the patrons for any conduct that may have crossed the line,” Horschel continued. “I am always trying to improve and do better; as a golfer, husband, father, or as a human being.”

“I try and conduct myself to the highest level everyday,” Horschel continued. “I support and congratulate my fellow playing partners on a regular basis throughout the round. As my fellows tour pros know, Augusta National can drive any sane person crazy with swirling winds and green complexes!