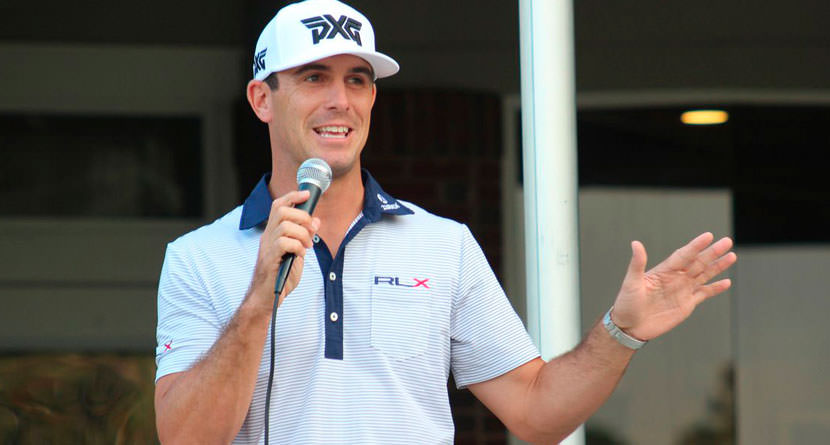 There’s something about Golf Channel analyst Brandel Chamblee that gets people riled up. Chamblee won on both the PGA and Web.com Tours during his playing days and by (nearly) all accounts takes his role as an analyst as seriously as he did his golf game.

However, whenever the University of Texas product opines on something — especially the swing of Tiger Woods — detractors come from all angles. On Thursday, one of those responding to the above analysis was former FedEx Cup champion Billy Horschel who took exception with Chamblee making observations without showing his face on the driving range to talk to instructors or players.

Horschel replied several times to Chamblee and called him “a ghost on the range.”

Chamblee tweeted two photos of Woods swinging, one from 2001 and another from 2013, and he called the 14-time major champ’s swing in the latter photo “Trackman-drunk.” Horschel asked Chamblee to elaborate, and after he did, Horschel insinuated that Chamblee didn’t know what Woods and then-coach Sean Foley were working on.

“Are you sure that’s what Sean and Tiger were trying to accomplish,” Horschel wrote. “Doubt you talked to either of them about what they were working on. You are a ghost on the range.”

Chamblee said he did talk to Foley and listened to Woods’s swing goals, then ended his tweet by saying, “and I’ve spent a lifetime on the range my friend.”

Horschel acknowledged Chamblee’s reputation as a shrewd analyst but said Chamblee doesn’t pace the range as much as some of his counterparts who “are getting first hand knowledge and seeing in person instead of on TV.”

Horschel added: “You do a great job with stats and looking at all the data. Probably best in the business. Your [sic] colleagues say the same thing. But I think it would be beneficial if you walked the range once or twice to talk to guys and see things in person instead of in camera. … You were in the booth a few years ago at Pebble and walked the range and talked to instructors early in the week. On air you said in was very beneficial for you cause you saw shots in person and actually able to talk and see what instructors were working on with students.”

Here’s the entire exchange (and we are glad to report that there looks to be a happy ending):