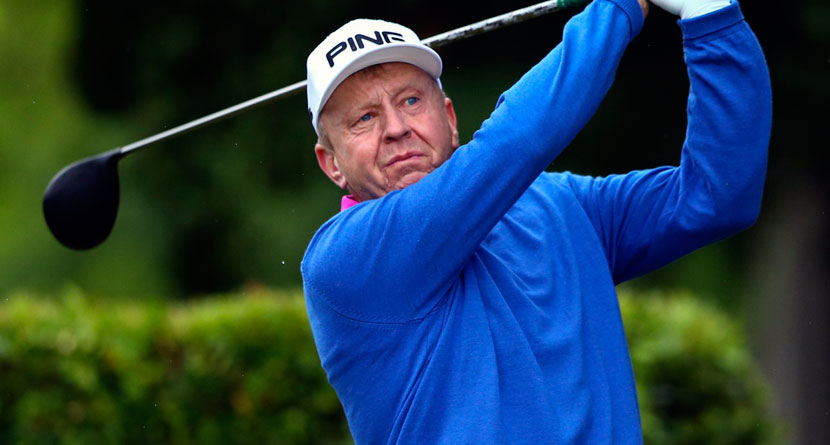 The fall is apparently the perfect time to commit rules infractions that result in disqualifications. In just the last two weeks, we’ve seen three instances of rule-breaking that resulted in players or teams forfeiting their spot in their respective events.

Now, in the afterglow of a dramatic PGA Tour Champions Schwab Cup Championship playoff comes the bizarre story of a two-tiered rules run-in by Billy Mayfair that has more twists and turns than Lombard Street in San Francisco.

Golf.com’s Michael Bamberger took a deep dive into Mayfair’s double rules debacle at the penultimate tournament of the season, the Invesco QQQ Championship. Needing a high finish to guarantee himself a spot in the season-ending event the following week, Mayfair got off to a good start with an opening-round 6-under par 66.

It was his second round, however, that would prove to be a rollercoaster of rules questions.

“In the space of seven holes, Mayfair had two serious rules issues,” Bamberger wrote. By Sunday morning, golf’s two harshest consonants were beside his name, by then at the bottom of the full-field list: DQ. There would be no third-week homecoming. Instead, he was consulting with his lawyer.”

Billy Mayfair was DQ’d at the Invesco QQQ Championship. Where is the video and why did he lawyer up? @bkatrek & @johnmaginnes speculate. pic.twitter.com/S0d9GGz9Dn

In a telephone interview with his lawyer on the line, Mayfair told Bamberger his side of the story. His first run-in came on the par-5 11th hole after hitting his ball into the left rough at Sherwood Country Club. With himself and Miguel Angel Jimenez out of position — albeit not yet on the clock — rules officials were nearby. Mayfair told Bamberger that he asked his caddie, Jeff Johnson, to keep an eye on the time knowing they only had three minutes to find the ball.

With help from his playing partner, spectators and rules officials, Mayfair was able to find his ball in a gnarly lie. He asked for a ruling to see if it was embedded — it was deemed not to be — and subsequently went on to make a double-bogey 7 on the hole.

After five subsequent holes of even-par golf, Mayfair reached the par-3 17th where he missed the green “in four-inch long grass on a severe upslope between a greenside bunker and an elevated green,” Bamberger wrote.

“Mayfair walked to his ball and, holding his 60-degree wedge with only his right hand, stood over it in the customary address position,” Bamberger continued. “He put the heavy sole of his wedge in the grass behind the ball. Viewers of the Golf Channel telecast could see that clearly, via a camera set up directly behind Mayfair. The clubhead went into the grass and the ball suddenly rolled both downhill and sidehill. It was an odd, unexpected sight, but the blades of Sherwood’s long, perennial ryegrass rough were damp and weak and golf courses are incubators for the odd and unexpected anyhow. The ball rolled in the rough, on that slope, at least a half-foot.” That’s where things got dicey. Mayfair told the rules official nearby that he didn’t believe he had caused his ball to move, but the Golf Channel broadcast team on the call seemed to disagree.

“That club was definitely down in the grass,” Phil Blackmar said on the telecast.

“I don’t know that he grounded it, but it wasn’t above the grass like he described to the official,” Lanny Wadkins added.

Mayfair would go on to chip up to the green and two-putt for a bogey 4.

(Neither clip from the 11th hole nor the 17th hole are currently available for release per Golf Channel’s deal with the PGA Tour, which reverts the rights to the Tour 48 hours after a tournament concludes.)

After the round, Brian Claar, the head rules official for the Champions Tour, asked Mayfair about the time spent looking for his ball on the 11th hole. Mayfair told him it took three minutes to find. From there, Claar went to the Golf Channel compound to look further into the ruling on the 17th hole.

Seeing the clip, which appeared to show Mayfair’s actions near his ball on the 17th hole cause it to move, Claar called Mayfair to the trailer to see for himself. After watching the clip, Mayfair agreed that he had caused the ball to move. As a result, he should have moved the ball back to its original place and incurred a one-shot penalty. Because he did not do so, he received a two-shot penalty for playing the ball from the wrong spot. His bogey became a triple bogey and he signed for a 76 instead of a 74.

So much to chew on in here, from Mayfair lawyering up for the interview to the Tour’s response to Bamberger when he asked for a transcript of a 15-second exchange: “We don’t have the resources for that.” ? https://t.co/IuWTYG5KsS

Coming to the course on Sunday at 2-under par for the tournament, but believing the rules fiasco was behind him, Mayfair said he thought he’d need to shoot something really low to get through to the final event of the season. However, before he could even tee off on Sunday, he was called once again greeted by Claar.

Having received information from a walking scorer who was adamant the search for Mayfair’s ball on the 11th hole took longer than the allotted three minutes, Claar checked the tape and found that it took Mayfair between 4:50 and 4:55 to find his ball.

Confronting Mayfair on Sunday morning, Claar explained what the tape showed and asked if Mayfair would like to view it himself. He declined.

.@GOLF_com‘s Michael Bamberger dropped a bombshell story yesterday on Billy Mayfair’s DQ at the @InvescoQQQChamp.@DMarr3 praised Brian Claar’s handling of the situation and says this isn’t the first time that Mayfair’s integrity has been called into question. pic.twitter.com/sWpzItSney

As a result of finding his ball after the allotted three minutes, Mayfair’s ball was deemed to be lost and he would have had to replay the previous shot. Since he didn’t, he was said to have played the wrong ball, and as far as the rules were concerned, he had never “completed” the 11th hole.

“You could say he disqualified himself the second he hit his tee shot on 12,” David Fay, the former USGA executive director, said.

Mayfair, under the Rules, therefore never played the 12th through 18th holes and was disqualified as a result.

“What I always got from P.J. Boatwright (a former USGA rules authority) was that the rules officials were always there to help the players, they were there not to call penalties on you, not just to try to get you disqualified,” Mayfair said. “I wish this could have been handled more on an on-the-level basis. It could have been handled better… by the rules officials. They see me searching for the ball. They know how long I’m looking for it. They have a stopwatch and I don’t.”

As a result of the long, sordid story, Mayfair was disqualified and unable to compete on Sunday, which effectively ended his chance to play in the season-ending event this past weekend.