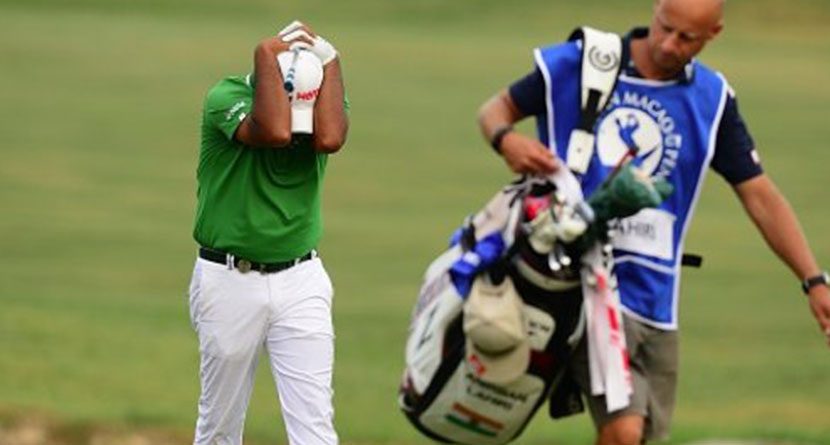 Anirban Lahiri entered the final round of the CIMB Classic with his first PGA Tour victory in his sights. Carrying a four-shot lead into Sunday in Kuala Lumpur, Lahiri’s round got off to a steady start, making pars on the first two holes before disaster struck on the par-5 third.

Ball stuck in a tree.
Quadruple-bogey 9.

On the 1st tee: Leader by 4
On the 4th tee: Behind by 2#GolfIsHard pic.twitter.com/7NY7NEQkD9

Lahiri’s drive lodged in one of the many palm trees around TPC Kuala Lumpur and forced Lahiri to retee. Hitting three off of the tee, Lahiri went on to bogey the hole on his second ball, resulting in a quadruple-bogey 9 that essentially ended his hopes at a maiden PGA Tour victory. He finished in a tie for third.

The 29-year-old Indian did a good job to get his score back to even par, but defending champion Justin Thomas went nuts. Coming into Sunday at 15-under par, Thomas fired a final-round 64, 8-under par to win by three strokes.

He’s won the @CIMBClassic for the 2nd straight year. https://t.co/OlwRMU5vQT

Hideki Matsuyama finished in solo second at 20-under par.

The full highlights can be seen below, courtesy of the PGA Tour.

The entire leaderboard can be found here.