Bizarre Non-Concession Ending At The US Mid-Am Final 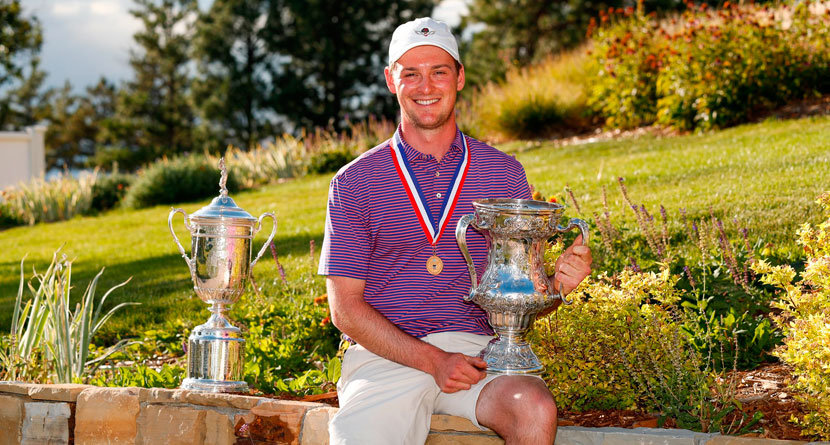 The United States Mid-Am is the crown jewel if the 25-and-over amateur golfer circuit mostly for what a victory at the annual event gets you: an invite to the Masters at Augusta National and an exemption into the U.S. Open.

Australian Lukas Michel, 25, earned those two rare invitations that the vast majority of Touring professionals would give an arm and a leg to receive by defeating 36-year-old Joseph Deraney of Tupelo, Mississippi in the 36-hole final on Thursday.

Michel finished tied for 33rd in the two-round stroke-play portion of the Mid-Am to qualify as the 46 seed in the single-elimination knockout bracket. Michel ran through the bracket notching victories of 2-up, 2 & 1, 4 & 3 to reach the quarterfinals. He then defeated Jacob Koppenberg in 20 holes to reach the semifinals against Stewart Hagestad, the 8th-ranked amateur in the world, which earned him a finals berth.

Lukas Michel, of ??, relinquished a 3-up lead, but rallied to win the final three holes and eliminate 2016 #USMidAm champion Stewart Hagestad.

With seven rounds of golf in five days under his belt, Michel faced off against Deraney in the 36-hole final in which he found himself 3-down on three separate occasions, but he putted his brains out over the course of the match to put himself in position coming down the stretch.

Birdies on Nos. 12, 14, 15 and 16 took him from 1-down to 2-up, but on the final green something bizarre happened. Deraney hit his tee shot on the par-3 17th hole at Colorado Golf Club to 10 feet. With Michel already having missed his birdie effort, the Mississippian had a putt to extend the match, but it broke across the hole.

As Golf.com’s Dylan Dethier described it, Deraney removed his hat and walked towards Michel. As he did so, Michel was confused because his three-footer for par to close out the match had not been conceded.

“With the length of it, I was really confused,” Michel said. “That putt is not a conceded putt.”

As they shook hands, Deraney realized he hadn’t given the putt and given its length, wanted to see it holed.

“I think he said, like, ‘Sorry, that’s not good, I thought it was shorter,’ or something like that,” Michel said. “I was like, okay. Well, you know, reset here. Like, not sure what was going on with that.”

Lukas Michel has done it!

Michel snuck the putt into the right side of the hole and punched his ticket to Augusta National and Winged Foot in 2020 as the first international winner of the Mid-Am.

“I had to hole my three-footer to win, which was probably the most nerve-wracking putt of my life,” Michel said. “Because three-footers for the win with all that on the line, as much as I try and not think about it, it’s pretty hard not to. It hit the right edge. It was like — it was nerve-wracking, obviously. But I holed it.

“Being the first international to win, I mean, it’s a massive thing. Being the first of anything to win something is always great, a great feeling. (Being a USGA champion) sounds unbelievable. It sounds almost too good to be true. Yeah, I guess it will sink in in the coming hours or days. But, yeah, I mean, I’m looking forward to what comes with it in the future for my golf.”