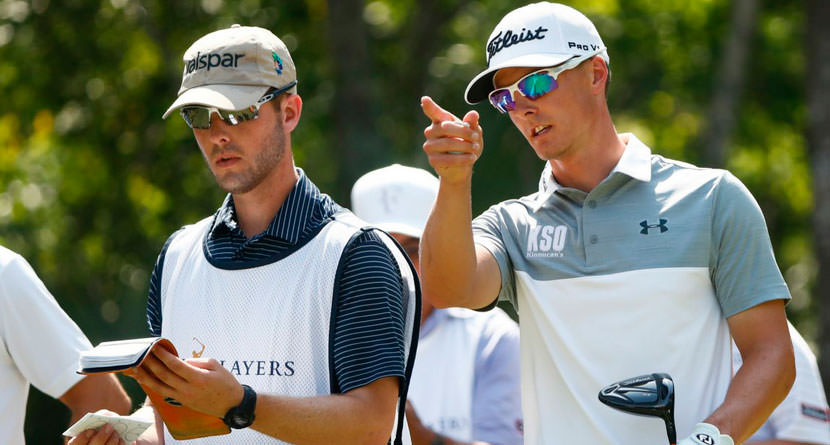 PGA Tour pro Blayne Barber’s caddie, Cory Gilmer, was hospitalized in the neurological ICU on Friday night after falling at a local restaurant and hitting his head.

Barber had shot 68-69 on Thursday and Friday at the Sony Open in Hawaii to make the cut by a shot. He and Gilmer went out to dinner before Gilmer left to meet up with friends at another restaurant where the incident occurred.

What a 12 hours it’s been. Cory (one of my best buds and caddie) is in the neurological ICU in HI after collapsing and hitting his head. Please pray for him. We trust in Jesus in the easy and the hard. Between that and the missile “threat” I’ve had quite the reality check today.

Barber said after his third round at the Sony Open that he was at dinner with Gilmer and that the caddie met up with some friends at another restaurant afterward when he fell.

“He was just standing up and fell and hit his head on the floor pretty hard evidently,” said Barber, who struggled to a third-round two-over 72. “By the time I got there, he was unconscious, and the paramedics were there. Then I went to the hospital with him [Friday night]. He’s pretty much just been unresponsive since then.”

Gilmer was still unresponsive by the time Barber teed off on Saturday morning. Doctors said they weren’t currently considering surgery, according to Barber, and they were trying to control the swelling and bleeding in Gilmer’s brain.

A few people went and were able to see Cory tonight. He’s still unconscious and sedated. He’s moving a lot in his bed but mostly from discomfort. They are monitoring the swelling in the brain from the impact of the fall. His family is coming tomorrow. Thanks for all the prayers!

He remained hospitalized on Sunday.

“He’s responsive to the extent that he’s in pain, and he said his last name, asked about his friends, asked the nurse to pray for him,” said Barber, who visited Gilmer before teeing off in the final round of the Sony Open in Hawaii. “But when I was there this morning, he’s essentially unconscious. The nurse opened his eyes for him and kind of pointed him towards us, and he didn’t know we were there or whatever.

“I’m not a doctor, but he’s not regressing, which is good at the moment. Swelling is the issue, and they’re concerned.”

Small improvement this morning for Cory. Still in a critical stage but asked about his friends, said his last name, and asked the nurse to pray today. He’s got a long way to go but continue to pray! Specifically that the swelling would go down in his brain.

Barber planned to stop by the hospital again Sunday night. Gilmer’s parents were also on their way to Hawaii.

“Just keep praying for him,” Barber said. “They can’t do anything about the swelling, [the doctor] said. It kind of has to happen naturally. So he’s there. He’s just kind of in a lot of pain and dealing with that.”

Barber shot one-under 69 Sunday to finish the week in a tie for 67th.

“Those last two days were really refreshing to play for me for the golf not to mean that much because it’s always way too important and way too grueling,” he said. “So to just go out there really free and not concerned with the result was a good change of mind, and I think this is kind of one of those key moments in my life that just is going to put things in perspective a little bit.”

Checked on Cory again tonight. Not much has changed from this morning. He’s stable but still completely unaware and mostly unconscious. It will be another 2-3 days before they will know more, but he’s in great care! Will be in Hawaii for a little while. Keep praying!