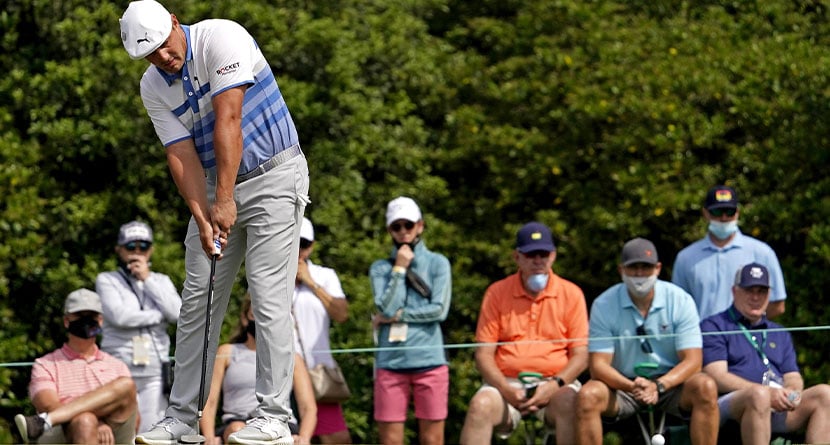 While golf’s distance debate rages on and the game’s pace of play problem continues to draw strong opinions, a pair of high-profile pros have brought another hotly-contested procedure to the forefront of the golfing public: arm-lock putting.

Five years after anchoring was officially banned under the Rules of Golf, Billy Horschel is ready to give the belly putter back in exchange for a ban on the arm-lock method used by players such as Bryson DeChambeau, Webb Simpson, Matt Kuchar and Will Zalatoris, among others.

After playing the first round of the RBC Heritage last week at Harbour Town, Horschel opined on the putting method in a diatribe from a question about greens reading books.

“I’m bringing up something different here and I’m sort of going out on a limb, but I don’t think this arm-lock putting should be allowed either,” Horschel said Thursday after his first round at the RBC Heritage. “I’ll give the belly putter back and take away the arm lock.

“I think when you look at what guys are doing now with the arm lock and moving the grips to the side where it’s parallel or matches the face and then when you do that up against your arm, I mean, that face is dead square and that face doesn’t rotate at all. It’s just sort of locked in. Guys are doing it too good.”

“I don’t think this arm lock putting is—should be allowed either.”

Billy Horschel says the popular arm-lock putting method used by Bryson DeChambeau, and others, should be banned: https://t.co/A80fevDQcm pic.twitter.com/UJOUVX0BwZ

Whether conjecture or not, “guys doing it too good” was a common refrain in 2014 when the anchor ban was announced. In the three years previous, four major champions used anchored putters, causing the USGA and R&A to take a closer look at the method and eventually ban it.

The decision irreparably harmed the careers of more than a few professionals and sent guys like Simpson searching for an alternative. Now five years after the official ban took effect, Simpson’s new method is under fire. Because there is no fixed anchor point on the body and the arms are moving independent of that point, arm-locking is allowed under the current rules.

According to Rule 10.1, a stroke is defined as: “Fairly striking at a ball with the head of a club. The fundamental challenge is to direct and control the movement of the entire club by freely swinging the club without anchoring it. … The player must fairly strike at the ball with the head of the club such that there is only momentary contact between the club and the ball and must not push, scrape or scoop the ball.”

“I don’t know, you could say it’s anchored. I don’t know because I guess anchored is having one point against somewhere and a fixed point,” Horschel said. “I know that’s not fixed, but it’s something similar to an anchor style.”

Earlier this week, Horschel got some backup on his stance from one of the best putters to ever play on the PGA Tour: Brad Faxon.

“We have to get rid of the arm lock”@BradFaxon tells @MichaelBreed that something needs to be done about arm lock putting pic.twitter.com/X2LYZg4lpD

“In my opinion, we have to get rid of the arm-lock,” Faxon said on SiriusXM PGA Tour Radio. “It’s absolutely anchoring. If the USGA doesn’t think it is, then they need to look at themselves in the mirror.

“That is not swinging the golf club. I don’t think that our founding forefathers of this game thought that you should be able to do that at all.

“I will stick with that (view) for the rest of my life, whether I’m a good putter or a bad putter.”