Faxon: Tiger Hit the Ball Past DJ “Half The Time” 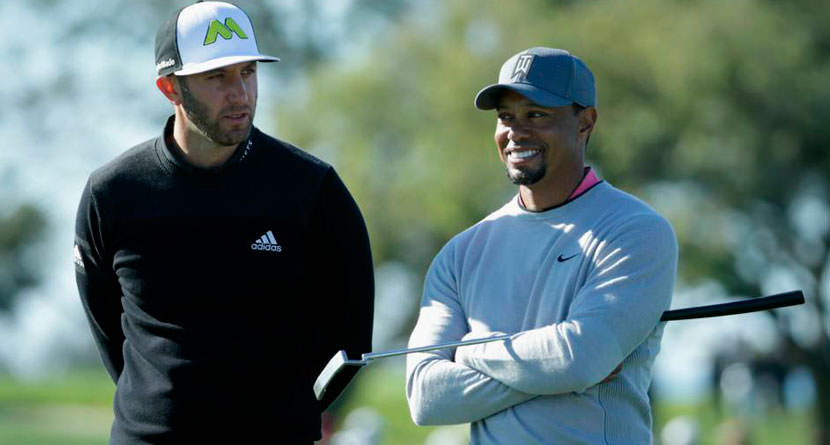 United States President Donald Trump broke the news that he would be playing a round of golf with Tiger Woods and Dustin Johnson on Friday, but it was the fourth member of the group who was making lines over the weekend.

Brad Faxon was the least-known member of the star-studded foursome and the eight-time PGA Tour winner penned a first-hand account of what it was like to play with the sitting president and two of golf’s biggest names for Golfweek.com.

We played a casual best ball match with a small wager – President Trump and I played Dustin and Tiger. They played from the back tees at 7,600 yards and we played up to the blue tees at about 6,500 yards. The President was gracious and entertaining. He told some stories, things he loves about the job and things he doesn’t love. I think he was excited to be in that group and we had a lot of fun.

I’d seen that Tiger had played with Rickie Fowler and Rickie made some comments about Tiger hitting the ball well and looking good. I would echo the same thing.

Tiger looked great to me. He was happy and, more than anything, he’s finally pain-free. The issues he had with the back the last couple of comebacks seem to be gone. He looked effortless, he looked free, he had some power.

I was impressed with how far he hit the ball. Probably on the 10 holes that they were both hitting driver, Tiger hit it past Dustin half the time and Dustin hit it past Tiger half the time. He looked great. I think more than anything, he looked at ease. He was not concerned about swinging hard and going at it with driver. The ball flight, the sound off the club, all of it was right there.

I also need to mention how impressive Johnson was, and how much fun it was to watch the current World No. 1 up close. He definitely lived up to the billing.

Tiger looked like he had all the touch shots down. On the very first hole he hit a pitch shot over a bunker that looked great. Hit some tough little pitch shots, tough chip shots and hit some close. Some to gimme’ distance.

I’m just so happy that he’s happy and can swing a golf club pain-free. We know there’s so much more to the game than hitting the ball, but he’s got a chance. He can practice again, work without being hurt.

Inside he’s probably nervous to do this again, but he brings so much energy to this game. He’s such a huge figurehead for us and a real difference maker. I hope for the best for him. He’s been through so much adversity. I’m excited and I’m sure he’s excited.

So, I witnessed first-hand what Fowler saw – A pain-free Tiger that looked like he was able to hit the golf ball and will be able to be in the mix again. I don’t want to make it sound like I’m saying he’s going to win next week. It’s obviously different playing a fun, casual round like this as opposed to a tournament. But he’s in a great place mentally and physically.