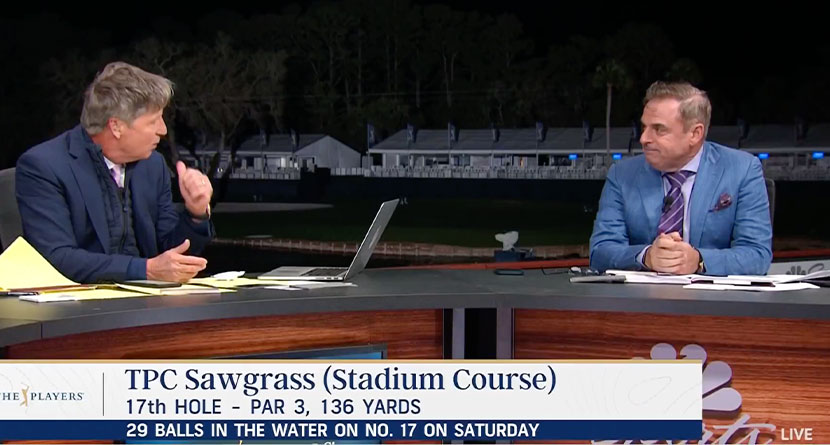 ​​The integrity of the 17th hole at TPC Sawgrass brings out a myriad of differing opinions ranging from a great hole at a pivotal time in the tournament to “the worst hole in golf,” as Brandel Chamblee had referred to it previously.

While Chamblee admits that he’s come around on the hole somewhat, he and new Live From analyst Paul McGinley got into a lively debate over the merits of the hole during a week in which weather played a major role in the proceedings, especially when play resumed on Saturday.

With players dealing with gusts upwards of 30 MPH, the 17th hole proved to be massively entertaining for golf fans, but wildly frustrating for the players. Over the course of some 6+ hours of play, 29 balls found a watery grave including those struck by some of the biggest names in the game, Collin Morikawa, Scottie Scheffler, Xander Schauffele and Brooks Koepka among them.

McGinley proved to be a worthy adversary to Chamblee on the set, arguing instead that the elements put an even higher premium on skill and execution.

It’s all a matter of opinion, but one thing is not up for debate: the PGA Tour is meant to be an entertainment product, and the 17th hole at TPC Sawgrass provides entertainment.

Whether it’s down the stretch of the event, or in a rain-delayed second round that brings in gale force winds, the best players in the world need to step up to the tee and pick a club somewhere between 6-iron and wedge and find dry land.