Chamblee Gets Robbed Of An Ace At Champions Tour Q-School 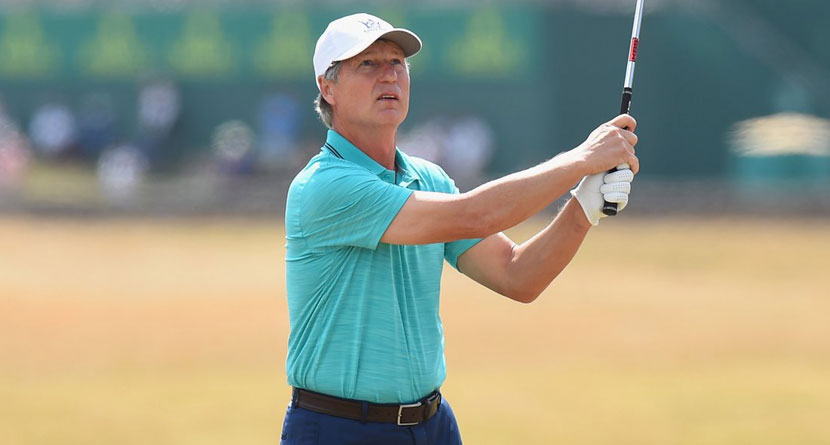 Brandel Chamblee has the ability to elicit an opinion out of just about anyone. Love him or hate him, golfers can empathize with what happened to the Tour pro-turned analyst during his first round at the final stage of PGA Tour Champions Qualifying School on Tuesday.

TPC Scottsdale, the home of the Waste Management Phoenix Open, is playing host to the 78 over-50 men who are competing for five Tour cards next season on the Champions Tour, and Chamblee got off to a rough start in the first of four rounds.

Teeing off on No. 10, Chamblee turned in 2-over par after making a double bogey on the par-4 18th hole. However, he bounced back quickly making birdies on three of his first five holes on the front nine.


Heading to the par-3 6th hole at 1-under par, Chamblee had 187 yards to the pin and probably should have walked off that green at 3-under par for the round if not for some brutal luck.

Chamblee’s ball plugged in the green’s surface, even moving some earth over the edge of the hole. Unfortunately for Chamblee, the Rules of Golf state that “when a ball is embedded in the side of the hole, and if all of the ball is not below the surface of the putting green, the ball is not holed.”

Chamblee would clean up the birdie and fire an opening-round 2-under par 69, which put him in 17th place overall.

The Golf Channel analyst couldn’t muster a repeat performance on Wednesday, however. The 57-year-old fired a 4-over par 75 to drop into a tie for 53rd place, 13 shots behind the 36-hole leader, Stephen Leaney of Australia. Chamblee has two rounds to make up eight shots on the field to get into the top-5 and secure playing privileges for 2020.