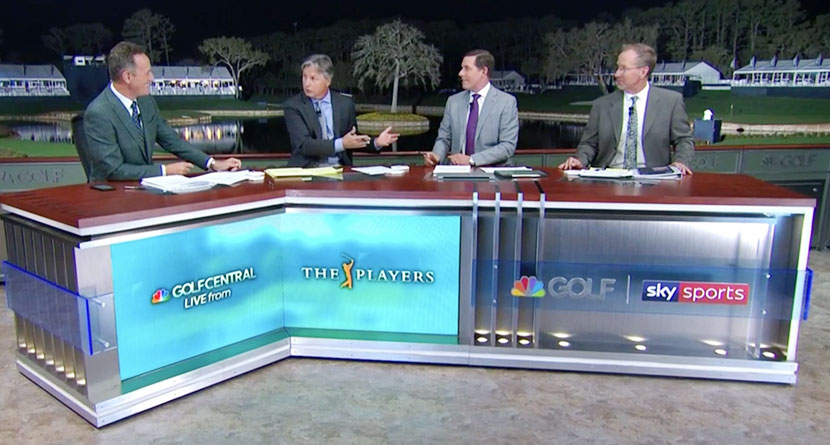 Brandel Chamblee has opinions. This we know. And while he is rarely shy about sharing those opinions, some of his most pointed in recent years have extended beyond the golf course to the golf-adjacent relationship between the game, its professional players and money from the Saudi Arabian regime.

As a vociferous critic of the game’s top players taking appearance fee money to play in the Saudi International on the European Tour, it was only a matter of time before we got Chamblee unfiltered thoughts on the Premier Golf League and its admitted association with the Public Investment Fund of Saudi Arabia, which invests on behalf of the Saudi government.

Chamblee’s time and platform came in the form of Live From The Players Championship on Tuesday evening when discussing defending Players Champion Rory McIlroy, the world No. 1’s aversion to the PGL at least in part because of where the money is coming from.


“I think (McIlroy) just pointed out the flaws in what it would mean to take the money, and the flaws would be that these Tour players are called independent contractors,” Chamblee said, as transcribed by Golfweek.com’s Adam Schupak. “If you’re lucky enough to ascend to a place on the PGA Tour, I can’t think of another – I can’t think of anything else in life where nobody gets to tell you what to do. The Tour can’t tell you what to do. You can fire your caddie if you don’t like the pants he’s wearing, and they do it. Ed Fiori famously fired his caddie. ‘Why did you do it?’ (He said), ‘I don’t know, I just got tired of looking at him.’ Managers kowtow to you, the Tour kowtows to you, caddies kowtow to you. Nobody tells a Tour player what to do.

“You find me another sport where they have that autonomy, and now all of a sudden they are no longer autonomous, they are beholden, and not only are they beholden, they’re beholden to people that in my estimation are not unlike a drug cartel.

Brandel Chamblee, a brilliant speaker, on the downside of PGL money: “They are beholden to people that, in my estimation, are not unlike a drug cartel. You’re talking about the most egregious acts against humanity. These people put homosexuals in bags + throw them off buildings.”

“You’re talking about the most egregious acts against humanity. These people put homosexuals in bags and throw them off buildings for sport. They chop up journalists. So every morning you’d have to look in the mirror and go, ‘Do I really like where this money is coming from? Am I not somewhat complicit? Am I not being a ventriloquist? Am I not sort of being a part of the euphemizing of these atrocities?’ And you’ve got one guy to stand out and say these are the problems here. Yeah, there’s a lot of money, but there’s a lot of existential baggage that comes with that.

That initial takedown wasn’t enough, however. In talking about entourages on the range at TPC Sawgrass, Chamblee let loose on another diatribe about McIlroy’s rebuke, this time comparing the Saudi money to sewer water.

“So if water is flowing downhill from a sewer, and because the volume is so great, it’s contamination is diffused such that you can’t really tell that it’s contaminated, and everybody is telling you to take a drink — Rory stands alone in saying, ‘Don’t drink the water. It’s contaminated.’

“And what he did there is far more rare and far more important than his talent is. His talent entertains us, and as rare as his talent is, you see that occasionally. But to see that kind of talent accompanied with this social awareness and this philosophical precocity, if you want to call it that, that’s out of this park.”

While Chamblee was passionate about the monetary aspect of the PGL, Live From analysts Justin Leonard and David Duvall laid out why the idea was “dead in the water,” to use Duvall’s words, from a player’s perspective simply as the result of a rigid schedule and the shredding of their autonomy as independent contractors.

“From a player’s standpoint, guys don’t want to be told where to go, when they’ve got to be there,” Leonard said. “You have to show up and play, and by the way, it might be halfway around the world. I think guys are going to be hesitant, guys are going to be resistant to that.”

Duvall echoed Leonard’s sentiments on setting their own schedule.

“The other thing, for lack of a better way of putting it, that puts the PGL dead in the water is the announcement of the nine-year TV partner deals and digital deals,” he said. “Where are these guys going to go to showcase their talents and be on television, and how does that affect the sponsorship dollars that are involved.”

Live From The Players will air throughout the remainder of Players Championship week, and will return once again prior to the Masters.