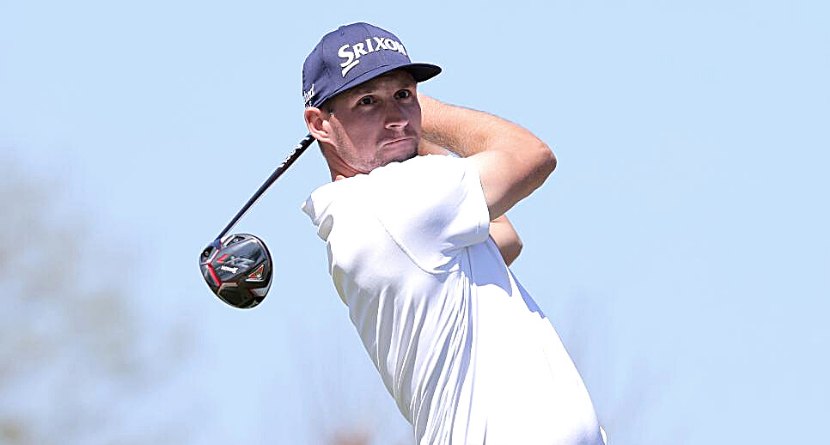 The longest hitter in professional golf is ready to unleash his explosive power at TPC Potomac this week — and no, Bryson DeChambeau was not miraculously healed by a cryotherapy chamber or Tim Tebow.

The man we’re referring to is Brandon Matthews, a 27-year-old Korn Ferry Tour pro who’s set to make his second career PGA Tour start this week at the Wells Fargo Championship on a sponsor’s exemption. The circuit’s leader in average driving distance in 2019 with 331.3 yards, Matthews topped out at whopping 341.5 yards in 2017 but didn’t hit enough drives to qualify for the crown.

But measuring the Temple grad’s true distance in relation to his peers has proven difficult in recent seasons; now on the cusp of obtaining his Tour card, he’s played without a driver in his bag more often than not over the past two seasons.

So what’s his stock yardage when he does wield the heavy lumber?

“My normal one that I’ve been hitting, kind of the ‘fairway finder cruiser’ will fly somewhere around just over 330,” Matthews said this week, “and then if I kind of lift one, I can fly north of 340.”

With ball speeds over 190 miles an hour, @B_Matthews12 is a force to be reckoned with off the tee.

Here’s how he became the longest driver on the @KornFerryTour last season. pic.twitter.com/D2nqgy0Ozp

To hear Matthews tell it, his father, Ted, deserves much of the credit for introducing him to the game, raising him to love it and pulling all the right levers to unlock his power. He told the story this week of how, when he was a toddler, his dad would send him to the red tee at the par-4 15th hole at his home club, Emanon Country Club in Falls, Pennsylvania, to see if he could make the 60-yard carry across a lake facing the tee box. The boy would graduate to the next tee once he found dry land, and in the process developed an appetite for crushing the ball as far as he could.

. @B_Matthews12 led the field in driving distance last week on the @WebDotComTour at 342 yards per drive on average! 💪🏼💣🏌🏼‍♂️ #HolyToledo @NoLayingUp #sauce pic.twitter.com/HutBuZGc8e

And as an added bonus, Matthews showcased his sterling character in 2019 when a fan with Down syndrome caused him to miss a crucial putt in a PGA Tour Latinoamerica event. Matthews lost the tournament but made a point to embrace the fan, a classy move that led to his only other PGA Tour start — a sponsor’s exemption at the Arnold Palmer Invitational.

Matthews won his first professional event on February 13 at the Astara Golf Championship in Bogota, Colombia and tearfully spoke about how he couldn’t wait to call his dad. “We [bleeping] did it,” were the first words he could muster.

“To go back and look at all the hard work and the dedication my father put in for me,” Matthews said, “the sacrifices that he has made to get me to where I am, it goes without saying how special he is to me.”

Matthews is currently the fourth-ranked player in the Korn Ferry Tour Points List, with the top 25 earning a PGA Tour card for 2023. So there’s a good chance we’ll be seeing more of him in the big leagues in the years to come.