Brehm Enjoying Paradise Without Forgetting What Got Him Here 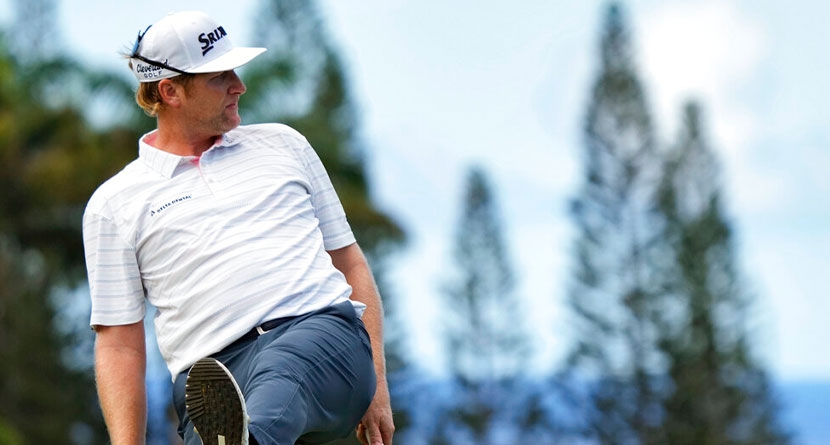 HONOLULU (AP) — Ryan Brehm’s two weeks in Hawaii to start the year is an amazing tale of perseverance and opportunity. Even better is that Brehm made sure paradise didn’t belong only to him.

He brought more than a dozen family and friends to Kapalua.

And then he met Borislav Tomas.


Tomas fled with his family to Germany during the Yugoslav Wars in the 1990s and eventually made it to Chicago. He was on Maui because a friend was getting engaged, and he spent New Year’s Eve at Spanky’s Riptide, a bar in Lahaina.

Sitting next to him was Brehm and his brother-in-law.

Tomas could be excused for not recognizing Brehm. Brehm had never had a top-10 finish on the PGA Tour until he cashed in on his last chance by winning the Puerto Rico Open, one of the feel-good stories on the PGA Tour last year.

Tomas was lamenting how he always wanted to play Kapalua but couldn’t get a tee time. That’s when Brehm mentioned he was thinking of playing the next day — the Sunday before the Sentry Tournament of Champions.

“He goes, ‘You don’t understand — you can’t get a tee time. They have some tournament going on next week,'” Brehm said.

Brehm couldn’t resist and invited Tomas to join them, and they kept the beers coming until 2023 arrived. It wasn’t until the next morning that Brehm realized what he had done, when Tomas sent him a text asking what time they were playing.

“I’ve never been more nervous,” said Brehm, a 36-year-old from Michigan who doesn’t get uptight by much except the occasional stray tee shot.

Much to his relief, Tomas managed to blend in just fine. He even chatted with Billy Horschel without realizing until later that’s who it was. And when the day was over, he sent Brehm a text: “Thanks for the greatest New Year’s Day I’ve ever had.”

“What a wacky 24 hours that was,” Tomas said by phone from Chicago, still trying to digest his good fortune. “He was playing from the back tees, hitting it 300 yards dead straight and I’m like, ‘What am I watching here?’ It was so awesome to see that live and that close.”

Tomas mentioned a half-dozen more times how grateful he was that Brehm invited him and how “everything that day was an average man’s best-case scenario.”

“I saw what a real golfer is,” Tomas said. “He takes his craft serious, but he can have a casual round with a guy he met in a bar.”

Such is the essence of Brehm. He is driven by the simple goal of trying to get better. At 6-foot-4, he is built like a linebacker and once dabbled in Long Drive Association competitions. He doesn’t seek attention but makes easy conversation.

“When he’s in the lunch room, he doesn’t do anything that makes him available to other people,” Joel Dahmen said. “But when you get under the shell of Ryan Brehm, he’s the most genuine human being, super educated on almost everything you talk about.

“No one knows Ryan Brehm is fun. It’s like he doesn’t want anyone to know he’s fun.”

Brehm and Dahmen didn’t think they had much in common until they realized how much they did, not only in their appreciation for what they do for a living, but the opportunity they see in just about everyone they meet.

And they connect on a much deeper level.

Dahmen lost his mother to cancer when he was a junior in high school, one of the top amateurs in the Pacific Northwest, and it derailed him for years.

Brehm is coming up on the two-year anniversary of losing his mother to glioblastoma, an aggressive brain cancer.

“That really messed me up,” Brehm said. “By the time she was diagnosed she was gone in three months. That changed me.”

The rest of 2021 was a struggle. He missed the cut in 10 of his next 12 events — one exception was a tie for 11th in Puerto Rico, his best result on the PGA Tour and what later proved to be a pivotal week in his career.

He had to withdraw from the Zurich Classic, a team event he was going to play with Dahmen, because Brehm tested positive for COVID-19.

Only after the season was over — and his card was lost — was Brehm told that he had a minor medical extension for missing the Zurich Classic. He talked it over with his wife, Chelsey. Hawaii? Pebble Beach? They settled on Puerto Rico because he had played well there.

His wife caddied for him in four Korn Ferry Tour events in the Bahamas, Panama, Colombia and Florida, and they arrived in Puerto Rico for their one PGA Tour start.

He won by six.

Reminder that Ryan Brehm was down to his LAST medical start in Puerto Rico last March. Needed a solo 2nd to keep his card. Instead, he won.

And now he is playing in a no-cut $15 million dollar event and is T10.

“I would never have been able to win if Chelsey wasn’t there with me and if my mom hadn’t died,” Brehm said. “I think she was up there giving me an inner calm. It’s not something you can force. I can’t imagine Tiger winning the Open Championship right after his dad passed. All that emotion comes out at the end.”

Dahmen was headed to Florida for The Players Championship when he saw Brehm was leading in Puerto Rico and thought to himself, “This is crazy.”

“I started crying in the Dallas airport,” Dahmen said.

The victory gave Brehm a two-year exemption on the PGA Tour, sent him from Puerto Rico and its $3.7 million purse to The Players and a $20 million purse. It got him in the PGA Championship (only his second major) and to Kapalua.

He was blown away the views, on the range and on the horizon.

“I’ve never been in a field like this where basically it’s a group of the best players in the world,” he said. “I’ve never stood toe-to-toe with that many of them.”

A triple bogey on the 11th hole Sunday wrecked his round — he tied for 35th — but not his mood. He works hard at golf. He also works hard at keeping life in perspective.

“We’re the very few on this island who get to enjoy it and take everything in, and we’re getting paid to do it,” he said.