Brice Garnett Shoots 88 In Final Round Of Wells Fargo Championship 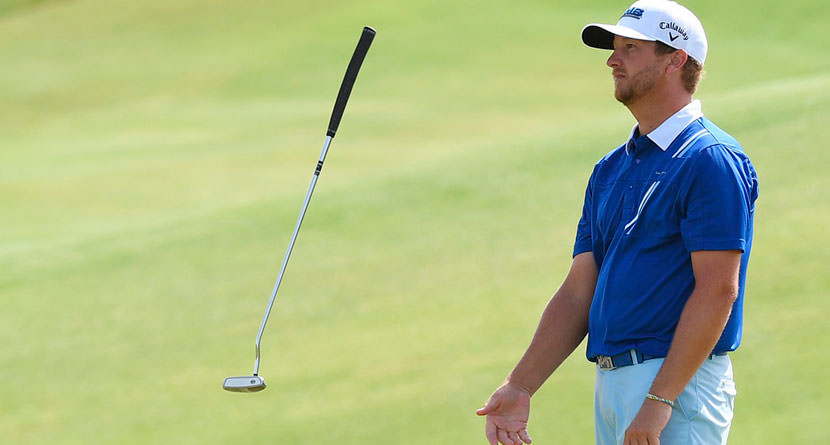 Professional golfers play for incredible sums of money every week and are insanely talented, but the fact that they still play the same maddening and humbling game as the rest of us truly hits home when one of the best players in the world plays like a weekend hacker.

Unfortunately for Brice Garnett, he had the dubious distinction of shooting a number so high on Sunday at the Wells Fargo Championship that naive amateurs in grille rooms around the world were probably telling their buddies that they could have beaten him.

Garnett shot a 17-over par 88 on Sunday at the Wells Fargo Championship, which included one birdie, seven bogeys, two double bogeys, one triple bogey and one quadruple bogey.

Golf is hard: Brice Garnett, who won on the PGA Tour in March, shot 88 today – the highest score recorded by anyone this season on Tour. He’s the only player this decade with a win and a round of 88 or worse in the same PGA Tour season.

Garnett’s poor round went from bad to worse when he finished triple-quad to shoot 47 on the back nine of Quail Hollow. By the time Garnett reached the penultimate hole, he was 10-over par on his round and all but guaranteed last place of those who made both the 36-hole and 54-hole cut.

Ironically enough, Garnett’s technically beat 12 other players who made the cut because of the Tour’s MDF rule.

Jason Day Impresses Down The Stretch To Win Wells Fargo

To Garnett’s credit, the winner of March’s inaugural Corales Puntacana Resort & Club Championship in the Dominican Republic, took the bad round in stride, posting to Twitter that he wasn’t even letting the bad round get him down.

Shot 88, finished triple, quad but did it with a smile. I had already forgotten about the round after 9 holes. On to @THEPLAYERSChamp!

By virtue of his win, Garnett is in the field in next week’s Players Championship as well as the PGA Championship in August.