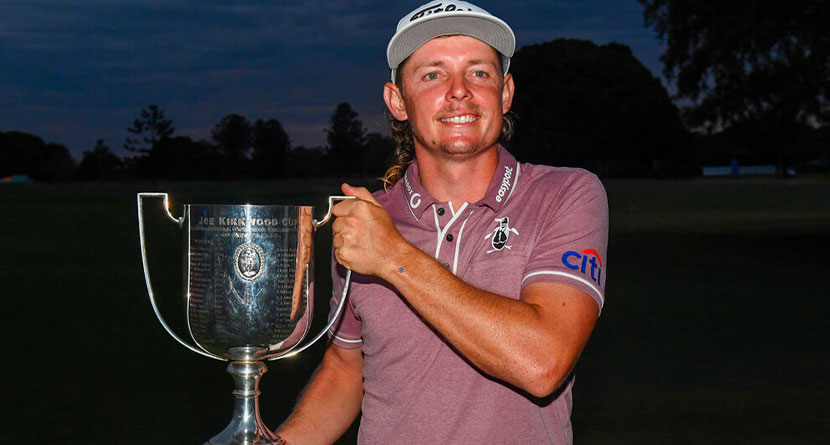 The world No. 3 shot a 3-under 68 to finish at 14-under par, three strokes clear of equal second-place Ryo Hisatsune (65) and Jason Scrivener (67), who had moved up the leaderboard Sunday to briefly share the lead and threaten Smith’s attempt for his fifth title this year.

Play was suspended twice for a total of two hours when electrical storms swept through Brisbane, sending players and about 10,000 fans searching for cover.


“You kind of get the mojo and for it to be stopped not once, but twice, is a little bit frustrating,” Smith said. “But I held on to it and played solid on the last eight holes.”

When play resumed for the second time Smith, playing in Australia for the first time in three years, made bogey on the 11th to fall back level with Scrivener and Hisatsune, but he responded with a birdie at the 12th to regain the outright lead.

Further birdies at the 13th and 16th sealed Smith’s third Australian PGA after claiming the 2017 and 2018 titles at Royal Pines on Queensland state’s Gold Coast.

Scrivener’s charge stumbled with a double bogey on the 17th after his long birdie putt rolled off the green and into the back corner of a bunker. A birdie on the 18th lifted him into a tie for second place with Hisatsune, who earlier in the round had holed out from the fairway for eagle at the par-4 second.

Smith, along with Scott and Leishman are among those who will play two weeks in a row in Australia. Next week they are scheduled to play in the historic Australian Open when the men’s and women’s championships will be decided at the same time.

The men and women will play in alternate groups at two courses — Victoria and Kingston Heath — over the first two days, with Victoria Golf Club set to host the final two rounds.