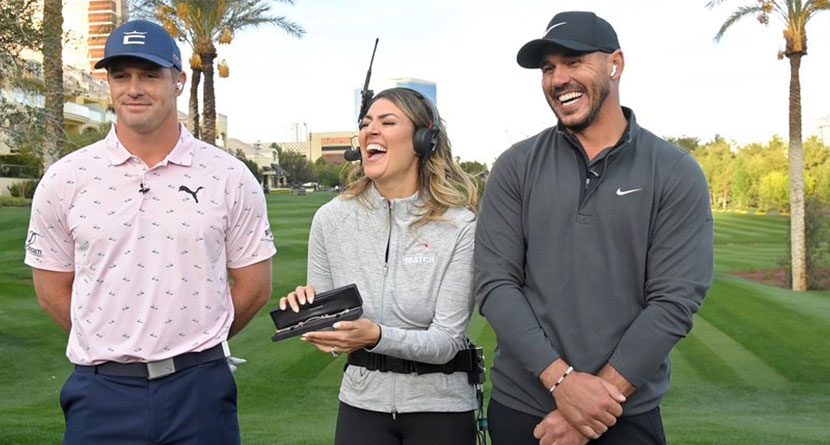 The Match V between Brooks Koepka and Bryson DeChambeau always seemed just a little… off.

While it’s clear — and became more so in the build-up — that the two aren’t very fond of one another, the decision to “settle the score” in a made-for-TV exhibition felt a little cheap and money-grabbing.

We’re picking nits when it comes to seeing two of the best players in the world on display, mic’d up and with Phil Mickelson & Charles Barkley on the call, so there were definitely worse ways to spend your tryptophan-sponsored post-holiday.

However, a one-on-one hit-and-giggle golf match wedged into one of the greatest sports weekends of the year can be a tough sell for even ardent golf fans, which is why we’re here to share some of the best moments from Koepka’s 4-and-3 drudging of DeChambeau.

Ready for the cameras to start rolling, DeChambeau kicked off the telecast on the first tee by offering some cupcakes to the small crowd that was following the action. While premeditated and scripted, the picture on the cupcakes was a good opening salvo.

Here’s a pic of the cupcakes Bryson handed out to fans prior to his first tee shot 😂😂#TheMatch pic.twitter.com/uRXdN7dhlO

Unfortunately from there on out, there wasn’t much for Bryson to smile about.

Phil On The Mic

It should come as a surprise to no one that Phil Mickelson likes to talk. Given free reign, Lefty went full Phil the entire broadcast, mixing in the nerdiest of golf nerdy commentary with other jabs and explanations on everything from elevation to brain waves.

While it made for interesting viewing, some technical issues allowed Mickelson’s commentary to continue to flow through the earbuds the players were wearing as evidenced by an exchange between Mickelson and DeChambeau on the first hole when Bryson was bunkered right of the green.

“This is in a spot that’s really tough,” Mickelson said. “Even though it’s a slight uphill lie he has a chance, but because the green goes away it’s difficult with his wedges he has because all of his clubs are very upright, because it’s very hard to slide this club underneath and create a high shot. Where he’s really good are the basic shots, but the ones where he has to get really high and soft are more difficult. I think a really good shot for him would be six to eight feet past the hole—”

“Just waiting on you, Phil,” DeChambeau said backing off the shot.

“Oh, you can still hear me?” Mickelson said.

Cupcakes, jabs, Phil on the mic and more. 😂

The latest version of The Match didn’t disappoint. pic.twitter.com/0LqRTKs6Dj

Joining Mickelson in the booth was Charles Barkley, one of the most entertaining people in sports television. Between Barkley’s blunt assessments and Mickelson’s sharp needle, the pair made for great listening for viewers at home.

While there were shots sprinkled in about Barkley’s golf game, one thing both Phil and Chuck are known for is their penchant for a wager, which as Barkley intimated cost him some money earlier on Friday afternoon during the Nebraska-Iowa football game.

“That’s it?” DeChambeau said about Barkley’s $25k offer. “You must have lost on the tables last night.”

“No, Nebraska gave up the lead today,” Barkley responded.

Thanks, Frank and Dean

Perhaps the biggest reveal of the entire day came courtesy of on-course reporter Amanda Balinos who shared a special nugget about what might be the Las Vegas course’s claim to fame: home of the beverage cart.

We’ve never been bigger fans of the Rat Pack.@Amanda_Balionis on the origin of the almighty beverage cart. pic.twitter.com/xuHquuGvci

“It has a ton of history on these grounds,” Balionis said. “But nothing more in line with Las Vegas lifestyle more than this story. Take a listen to this. Dean Martin and Frank Sinatra used to tee it up here, but they would never play an entire 18 unless cocktails were provided. So what happened? Desert Inn, as it was called at the time, said we have a solution for this. We’re going to create a golf cart, but stock it full of all of the possible cocktails that Dean Martin and Frank Sinatra could possibly want.

“So yes, you’re hearing this right: You can thank Dean Martin and Frank Sinatra for inventing the beverage cart. And what better place for it to be invented than right here in Las Vegas.”

Chuck Plays By His Own Rules

As many weekend warriors can relate, Barkley doesn’t really follow the Rules of Golf. In fact, he was more than forthcoming about his aversion for them.

Asked how he would play a shot from a bush like DeChambeau was faced with on the first hole — his ball came to rest in a bush before getting relief from a sprinkler — Barkley said he has no problem moving the ball out so he can play the shot.

“I have no problem cheating, I’m not gonna lie” 🤣

Whatever you expected from this version of The Match, one thing was clear: Brooks Koepka didn’t want to lose this thing. He came out firing and never looked back. Needing only nine holes of the 12-hole match, Koepka kept the pedal down, which was contrary to how Mickelson predicted the Match would turn out.

Even DeChambeau had to give props to Koepka, wondering where this kind of play is on the Tour week in and week out.

“It’s kinda like my major right now, right?”@BKoepka had this circled on the calendar. pic.twitter.com/h7ImCkh991