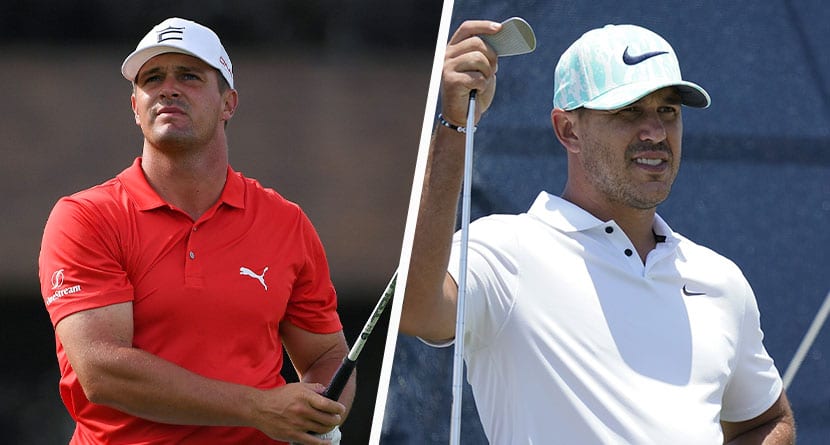 The anticipation for major championship tee times is typically only relevant to golf sickos looking to watch 12 hours of golf coverage or gamblers looking for an edge in wave conditions.

This week at the U.S. Open, however, was different. The Tuesday reveal of the tee times had the possibility of embracing chaos by putting two of the biggest stars in the game together.

While that sentence doesn’t seem too controversial — after all, who wouldn’t want to watch some of the best players in the world compete side by side? — but when you realize the main protagonists could maybe, possibly, potentially be Brooks Koepka and Bryson DeChambeau, the anticipation for a scheduled time of arrival and play for the third major championship of the year reached a new expanse of eyeballs.

Yet when 11 a.m. EST / 8 a.m. PST came on Tuesday, Brooks and Bryson weren’t together. They weren’t even on the same side of the draw as one another.

While some lamented the pairings as an opportunity lost, there were rumblings of negotiations afoot at Torrey Pines spurred on primarily by a statement former PGA Tour pro Brad Faxon made on a SiriusXM PGA Tour Radio show with instructor Michael Breed.

Brad Faxon tells Michael Breed what he’s heard about Brooks and Bryson possibly playing together at the US Open@BradFaxon I @MichaelBreed I @usopengolf pic.twitter.com/rhqHyh8AfN

“I found out last night that the USGA actually did call Bryson DeChambeau and his agent and asked them if he’d be okay with (a pairing with Koepka), and Bryson declined,” Faxon said.

“I would be okay (playing with Brooks), but there was never really anything that went through me,” DeChambeau said.

“I was not asked about playing with Gary Woodland nor Bryson,” Koepka said when asked about a hypothetical most recent U.S. Open winner’s pairing.

“Totally false,” DeChambeau’s agent, Brett Falkoff, said. “No one from the USGA ever reached out to Brooks and Bryson. It’s the USGA. It’s their choice. I don’t know why this pairing was such a surprise to anybody.”

The USGA corroborated the denials, with Craig Annis, brand manager for the USGA, also saying, “100 percent false. Bryson was not asked.”

As for other players, a few said they would have liked to see the two brawny major champions play together, including the hypothetical third-wheel, Woodland.

“I think it would have been great. I think the fans, all my friends back home, everybody was talking about it. I think it’s good for the game,” Woodland said. “Brooks didn’t play for two weeks and he’s all over ESPN, all over the sports news. I think that’s good.

“I think the energy in that group would have been amazing. I would have instigated and tried to start fights or whatever I could have done.”

Jordan Spieth and Webb Simpson proved that the guys down the range are treating the unusually public situation similar to sports fans around the world… they chat, they gossip, they speculate.

“It’s chatter,” Spieth said. “I don’t really know how it all started. I don’t know where they’re at now. I don’t know the severity. They didn’t pair them this week and stuff like that, but I’m sure it will happen soon enough. Seems like people would be interested to watch that.”

“I think it’s fun,” Simpson said. “I think they’ve got a rivalry now, and I think it’s good for the game in the sense of rivals. Them kind of being open and honest is good in a way because we know kind of what they think. I don’t know if they texted each other on the side and possibly went in agreement, ‘let’s play this thing up for player impact program.’ That was kind of one of my thoughts.”

As two of the top players in the game, a rivalry bearing out in real-time will continue to be a talking point this week and into the future. Pairing them together to start a tournament would have been interesting, but just imagine the ratcheted-up drama that an organic late Saturday or Sunday pairing would bring with the two of them earning the right to play together as opposed to it being manufactured.