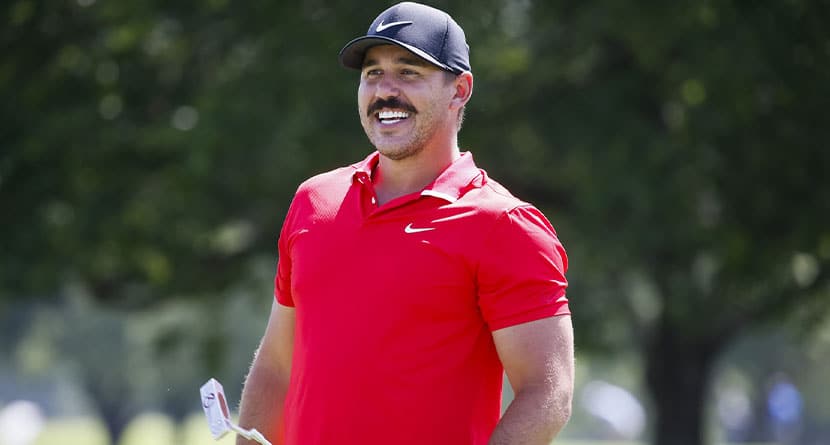 Brooks Koepka said in a recently-released interview with Golf Digest that he believes he’s going to catch Tiger Woods in major championships won and has a plan in place to catch Jack Nicklaus as well.

…And that wasn’t even close to the most controversial thing the four-time major winner said in a wide-ranging interview included in the magazine’s Ryder Cup preview.

Speaking with Matthew Rudy, Koepka sat poolside at his Jupiter, Florida home and spoke candidly on everything from mental health and his relationships to the Ryder Cup and trash talk in golf.

Unsurprisingly one week away from the Ryder, Koepka’s most plucked and pasted response came when asked about his feelings on the biennial matches and what he dislikes about them.

“It’s different. It’s hectic. It’s a bit odd, if I’m honest. I don’t want to say it’s a bad week,” Koepka said, intimating that it may be just that for him personally. “We’re just so individualized, and everybody has their routine and a different way of doing things, and now, it’s like, OK, we have to have a meeting at this time or go do this or go do that. It’s the opposite of what happens during a major week.

“If I break down a major week, it’s so chill. You wouldn’t even believe me. I go to the course. I play nine holes. I go work out. Other than that, I’m sitting and watching TV, taking my mind off golf with relaxing stuff. The physical part, I can handle. The mental side, you have to be able to turn it off. Sometimes, the power comes from being able to turn it on. But for me, I get power from turning it off. That’s been a huge, huge thing for me that I really haven’t understood until the past five or six years of my career.”

.@BKoepka is our latest cover star. 💯

The four-time major champion sat down with us poolside to chat about his mental game, being in the mix with Tiger and Phil, modern-day pro athletes and more: https://t.co/IXQv3Ofv1h

“It’s tough. There are times where I’m like, I won my match. I did my job. What do you want from me?” Koepka continued. “I know how to take responsibility for the shots I hit every week. Now, somebody else hit a bad shot and left me in a bad spot, and I know this hole is a loss. That’s new, and you have to change the way you think about things.

“You go from an individual sport all the time to a team sport one week a year. It’s so far from my normal routine. I can barely see my [personal] team. It’s hard to even go to the gym.

“At the Presidents Cup in New York, we had to go to the gym at 5 a.m. to get it in. We went to the Equinox, and it was me, Dustin and Tiger, and we come back and go to a team meeting. Under regular conditions, I take naps a lot. I might take an hour, hour-and-a-half nap, or just chill on the couch and watch SportsCenter, before rounds, after rounds, whatever. There’s no time to do that at the Ryder Cup. There’s no time to decompress…

“It’s just maybe not in my DNA, the team sports thing.”

The above quotes were pulled, poked and prodded by pundits — both amateur and professional — about what the Ryder Cup should mean to the best players in the world as opposed to what it appears it actually does, given Koepka’s honest insights.

While the law of the present blew up the Koepka interview thanks to next week’s matches, perhaps more interesting to digest was the way Koepka spoke about his mindset and relationships, which manifests itself in the way he described some of his personal relationships, as Rudy spoke about on SiriusXM PGA Tour Radio.

“In my mind, I’m going to catch him on majors. I believe that. Brooks Koepka got candid with Matthew Rudy on his mindset. Matthew broke it all down with Sobel & the Caddie. 👇@RudyWriter | @BKoepka | @JasonSobelTAN | @ESPNCaddie | @GolfDigest pic.twitter.com/H7JcIlZ0vv

“Every great athlete struggles with (relationships) compared to a normal person. My family relationships aren’t as good as they would be if I were a normal person,” Koepka said, going on to admit he doesn’t plan on fixing them anytime soon. “Sometimes I come home on an off week, and I know my parents want to see me, but for two or three days, I need to decompress and get out of that mode, or I’m going to stay in it. That makes it hard to have friends or dating or family.

“What makes it even harder for some players is that it’s difficult for them to say no. Over the past few years, I’ve found that because I’ve grown into myself, and I’m genuinely happy inside, it’s easier to say no. That’s hard for some people to hear, especially my parents or my brother. I don’t get to see my brother as much as I’d like because he’s on his own grind.

“I don’t have the relationships in my life that I would want, but I want to be the best golfer I can be. So for another 10 years it’s just going to be what it is, and that’s the sacrifice you make when you’re on the extreme end when it comes to the mental side.”

There’s plenty more to unpack from the interview, including gamesmanship that Koepka displays, what it’s like in the cauldron against the likes of Phil Mickelson and Tiger Woods as well as some sneaky thoughts on golf course design.

You can read the entire interview here.