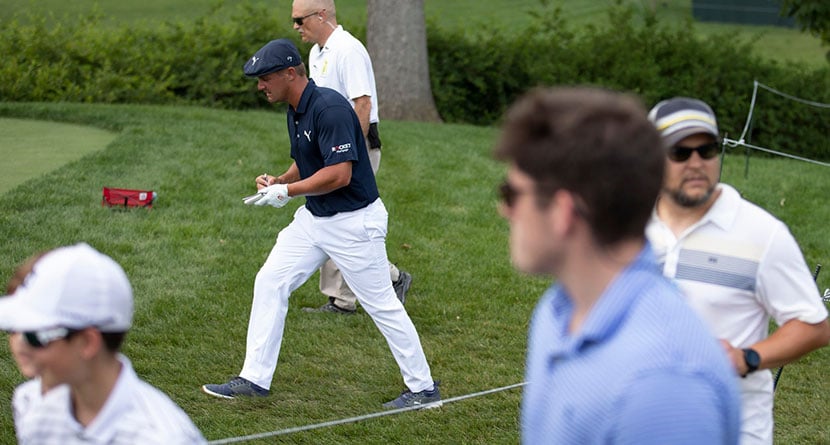 The latest development of the public rivalry between Brooks Koepka and Bryson DeChambeau may have gone too far in some critics’ estimation.

With the rivalry becoming one of the predominant storylines in the game over the past few weeks after its escalation at the PGA Championship, DeChambeau was the first of the long-hitting pair to tee it up again on the PGA Tour in the aftermath of the now-infamous leaked video.

Fans were quick to take sides, and following a social media post from Koepka on Friday evening, Koepka’s legion — or even more likely, agnostic loudmouths — were encouraged to heckle DeChambeau over the weekend at the Memorial Tournament.

Chants of “Let’s go, Brooksy!” seeped into the television broadcast even as Koepka sat some 1,000 miles away at his Jupiter, Florida home.

Capping off a long day with @MichelobULTRA! Thanks for all the support today. Also, we’ve got something for you… pic.twitter.com/kwtwXg3Kqb

Prior to his video post, Koepka retweeted one from @PFTCommenter, Barstool Sports’ semi-anonymous, full-time caricature of an internet commenter, responding to a fan who said DeChambeau and his caddie were pointing out and having anyone calling him by Koepka’s name ejected, a claim DeChambeau would later deny.

“Oh, they weren’t taunts at all, it was flattering. I think it’s absolutely flattering what they’re doing,” said DeChambeau. “They can keep calling me that all day if they want to, I’ve got no issue with it. Most people think it’s a distraction, but I grew up learning how to deal with that stuff and I honestly thought it was flattering.”

The fact that DeChambeau has had and will continue to have hecklers isn’t a huge deal — it’s been part of the game for years. The slippery slope that Koepka treads with his beer for getting booted campaign, as Golfweek’s Eamon Lynch put it, is that it “crosses the line from entertaining fans to enlisting them as co-conspirators.”

For DeChambeau, it’s nothing new and the content of the taunts isn’t what irritated him, he says, it was more the timing.

“I’m proud of the way that I’ve handled the situation,” DeChambeau said Saturday. “I think that people think that it bothers me, it really doesn’t. I mean, that one video clip that came out the other day… it was more of the person saying it in my back(swing) than anything that bothered me.

“It wasn’t the fact that he said Brooksy, it was just, he said something at an inappropriate time. If he said peanut butter and jelly at the wrong time, I would have probably said the same thing.”

When pushed on the faux-campaign, Koepka played coy.

“I’d never condone anyone being a distraction during someone’s swing or when they are about to hit,” Koepka told Lynch. “As professionals, we do enjoy fans getting engaged at the appropriate times. It’s part of sport and competition. Hecklers are always going to be a part of any live performance. We all know that out there. We all get called different names. I’ve been called DJ many times, even when I was slipping at Bethpage. It’s part of it. He even said he considers it flattering.”

“With the Michelob Ultras, I wanted fans to know I saw what was going on and I appreciate fans who care about golf. It’s great to see fans out there loving it, having fun after a year of no one.”

Fans’ return to sports hasn’t been the smoothest reintegration following the height of the pandemic as multiple fan run-ins at recent NBA games have shown or Monday’s United States Men’s National Team soccer game reiterated, but when it comes to golf, there’s a code of conduct that should be adhered to, ie. you don’t yell during the swing.

Chants of “mashed potatoes,” “Flavortown” or “Brooksy” are the cost of doing business in a public setting while playing for millions of dollars… so long as the chirping remains post-impact.