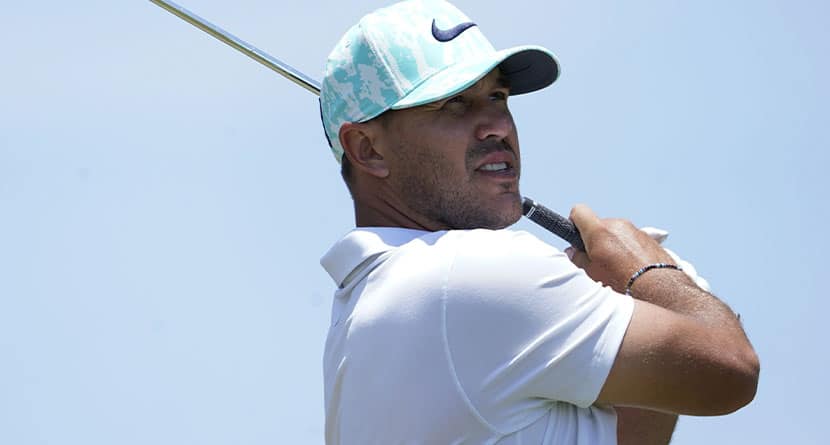 When Brooks Koepka and Justin Thomas started an annual hole-out bet at the end of 2018 during a round at the CJ Cup, Brooks Koepka had an immediate pang of regret.

The two top Americans made a wager — widely reported to be worth $1,000 a pop — that any 50-yard or more hole-out would result in payment to the other.

“I don’t really hole out much,” Koepka admitted at the time, “so that was a stupid bet on my part.”

With hole-outs few and far between for even the best players in the world, the bet made its way back into headlines during the second round of the Travelers Championship this past weekend. While Thomas wasn’t in the field, Koepka was and on Friday morning, the four-time major champion got himself some of that JT money with a 159-yard hole-out eagle on the 18th hole at TPC River Highlands.

Like Thomas, Koepka was quick to realize what the eagle meant, locating a PGA Tour Live camera and sending a message straight to Thomas.

“It’s just a little thing we have between us two, just kind of a hole-out bet and the monetary value doesn’t matter,” Thomas said at the 2019 BMW Championship after a hole-out of his own. “Just something a little fun between us that we’ve done.”

As two of the richest players in the game, it may seem like a drop in the bucket to hand over a few thousand dollars to the winner at the end of the season, but it’s the eg0-driven act of physically losing money that gets Koepka and Thomas’ attention.

“Money has never driven me. I hope it never will. I play to win trophies and win championships and be the best player to ever walk the planet, and that’s all I play for,” Thomas explained. “Whereas I go play a money game at home where this putt is $200 for the last hole and I have to physically give my friend $200, that makes me nervous. When you have to physically give the money over and you lose to somebody, that’s — I’m not saying I don’t have a rush out here, but that’s fun. This is fun too, but it’s different. You know what I mean?”

Every golfer who has grinded over an 8-footer to win a friendly wager with a buddy knows exactly what he means.

As for the year-long tally, that was Koepka’s fourth hole-out of the season, according to the PGA Tour. Thomas, however, has five.