Koepka Enjoyed A Wild Night In Vegas After MC 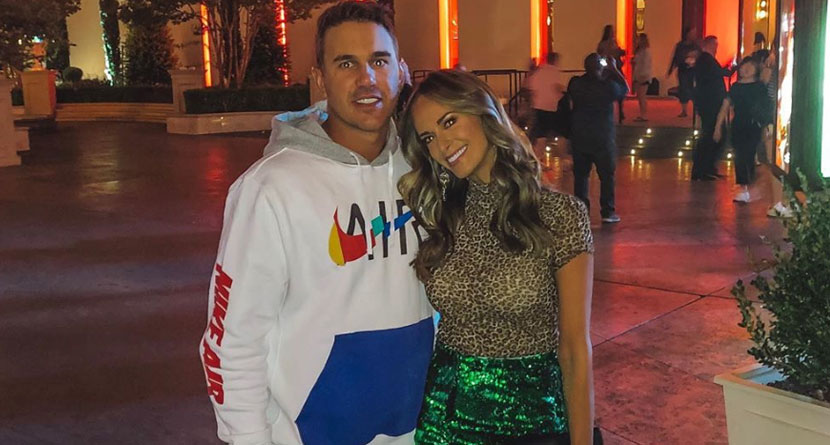 When the PGA Tour stops in Las Vegas, it would be a wasted trip if you’re not there for four days for one reason or another.

While every player in the field would like to play all four rounds of the tournament, there are worse places to log a missed cut, as evidenced by the No. 1-ranked player in the world, Brooks Koepka.

Making his first start of the 2019-20 season on the PGA Tour, Koepka shot rounds of 1-under par 70 and even-par 71 to miss the 36-hole cut by four strokes. However, with his model/actress girlfriend Jena Sims by his side and other friends in the desert looking to enjoy a good time, Koepka took advantage of his lack-of-Saturday tee time.

Golf.com’s Luke Kerr-Dineen did the heavy lifting when it came to scouring Sims’ Instagram page and story to recount the night.

Taking pics with your boyfriend is an extreme sport because you have 15 seconds to get one shot ??

The night began with a dinner at Nobu Restaurant in Caesars Palace on the Las Vegas Strip before the group went back to their room to gear up for the night with some bathroom dancing. With his freshly-stem celled knee ready to go and practice back on the agenda for Koepka, the bathroom moves transitioned to the Omnia Nightclub in Caesars where Sims took part in a Barbie dance booth and Koepka put his moves on display in what appears to be a mini ambulance. Koepka and Sims weren’t the only pros who missed the cut to enjoy the nightlife of Las Vegas. According to PGA Tour winner Max Homa’s Twitter page, his plan to leave town was postponed on more than one occasion because of the festivities the Tour stop had to offer.

It appears Homa’s Saturday night went similarly as he updated his status on Sunday to show that he was finally getting on a plane on Sunday afternoon.

Update: finally getting on a flight home #oops https://t.co/SB7BjSKwOh

As we said, there are worse places on Tour to miss a cut.