Koepka Lashes Out Over Fan Throng At PGA Championship 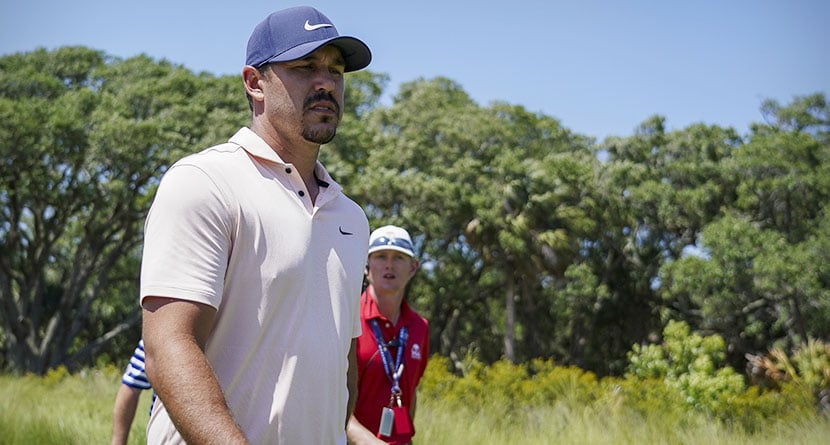 The scene on the 72nd hole at the PGA Championship was right out of a movie.

As Phil Mickelson moved towards the 18th green at Kiawah Island’s Ocean Course with a two-shot lead intact and 16 feet for birdie, the fans stormed the fairways, engulfing Mickelson, his caddie, his playing partner, Brooks Koepka, and Koepka’s caddie, Ricky Elliott, among others walking inside the ropes.

It made for a scene reminiscent of Tiger Woods’ Tour Championship victory in 2018, except it would soon come to light that this one wasn’t premeditated and the golfers, caddies and others inside the ropes weren’t able to be properly protected from the throng.

Koepka, who has been recovering from a knee injury for the past three months, was none too pleased with how things went down on the 18th hole.

Asked about the scene on 18, Koepka let loose.

“I don’t think anybody really understands until you actually you’re coming out of surgery. Even when I was doing rehab and there’s five people kind of standing by your knee, you get a little skittish.”

Koepka’s revelation that he thought someone may have been targeting his injured knee raised some eyebrows and he was asked to elaborate.

“I don’t mind waiting or being in that crowd. I don’t know, it felt like somebody tried to, I don’t know what the deal was, but it’s what it is. I’ll be putting it on ice today. It feels like s— right now,” he said. “It got bumped a few times. Somebody jammed Ricky and he stopped unintentionally because he got drilled in the face, and then I got drilled in the bag because he got stopped so quickly.

Koepka wasn’t the only one upset. His father, Bob, made his feelings known on Twitter as well, claiming that Elliot was hit by a chair and Koepka was kicked.

PGA Tour are you fining yourself for your lack of security on 18! Quick to fine players for their lapses of judgement #hypocritical

Then step up PGA of America!

On Monday, PGA of America CEO Seth Waugh apologized for the crowd getting out of control.

A statement from PGA of America CEO Seth Waugh. pic.twitter.com/nY0IKCgqe3

“While we welcome enthusiastic fan engagement, we regret that a moment of high elation and pent-up emotion by spectators … briefly overwhelmed security and made two players and their caddies feel vulnerable,” the statement said. “We always put player safety at the top of our list and are grateful order was restored. I have spoken to both players and apologized on behalf of the Association.”