Koepka Calls Out Rules Officials For Lack Of Free Relief 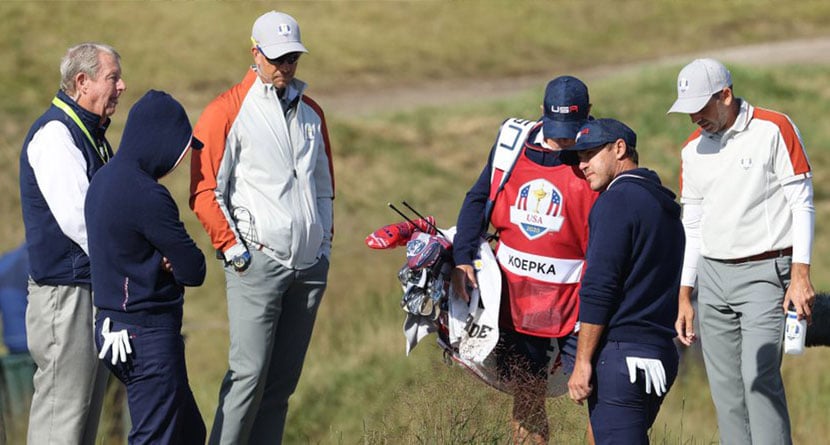 Tensions running high is nothing new at the Ryder Cup, but the chippiness is usually aimed towards the opposing teams, not a pair of unsuspecting rules officials.

However, during the Saturday morning foursomes session, Brooks Koepka had some pointed words for a pair of officials working the event after he was not given relief from a drain near his ball in a fairway bunker on the 15th hole at Whistling Straits.

The Florida State squad of Koepka and Daniel Berger were up against the new-age “Spanish Armada,” Jon Rahm and Sergio Garcia, who had proven to be Europe’s top team through two sessions of play.

When Koepka reached his ball, he noticed a drain cut into the fairway bunker near where his ball laid. He called in an official in an effort to get relief.

“First of all, I don’t think it’s going to interfere with the area of your intended swing,” David Price, the rules official, said in a conversation picked up on the NBC broadcast.

“You don’t think my club might hit right there?” Koepka said, pointing downward. “Have you ever seen me hit a ball?”

Koepka was understandably hesitant having spent the run-up to the event rehabbing an injured wrist, which was hurt during the Tour Championship when he struck a hidden tree root.

“There was a root that far down a couple of weeks ago,” Koepka said, referring to his wrist injury at the Tour Championship at East Lake. “If you are going to say no, I’ll call for a second (opinion).”

“I still can’t see you reaching that,” he told Koepka. “There is no way.”

“Did you not see a couple of weeks ago?” Koepka rebutted.

At that point, Koepka had enough and he pointed at both officials and said, “If I break my wrist, this is on f—— both of you.”

While his well-being concerns are understandable this is not a great look for @BKoepka pic.twitter.com/CW5JROBWRy

Fortunately, Koepka was able to extricate the ball without hitting the drain, hitting the green and giving Berger a chance to win the hole. Berger would miss the birdie putt and the hole was halved.

Koepka and Berger would go on to lose their match, 3 & 1, but the ruling was a point of conversation even after the match.

Asked after the match if he could speak on the ruling, Koepka said, “Yeah, we didn’t get it.”