Brooks Koepka, Mired In A Major Slump, Literally Runs Out Of Gas 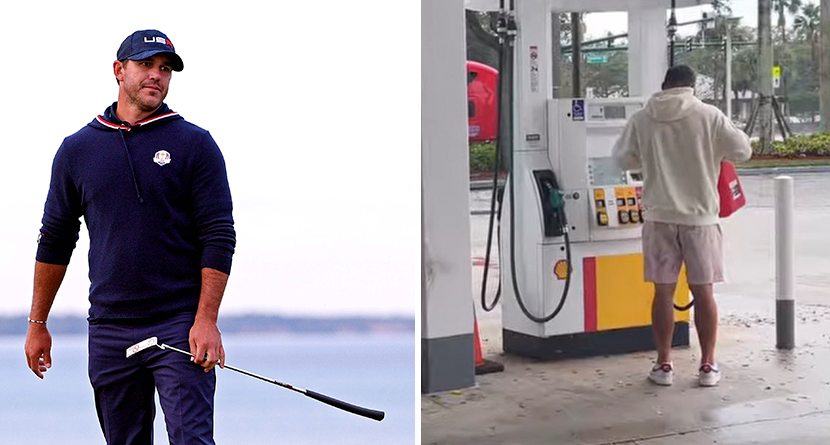 Sometimes the tweets write themselves. Such was the case Tuesday when a photo surfaced of Brooks Koepka — decked out in a hoodie and shorts, his Rolls-Royce parked roadside in an unknown locale — hightailing it through the raindrops to the nearest gas station.

Golf journalist Eamon Lynch gets credit for the snap, along with an amusing follow-up in which Koepka can be seen at the pump, filling up one of those telltale red plastic canisters. It’s unclear why Lynch was in close pursuit — perhaps an interview or some other media project will reveal itself in the coming days — but the snarky scribe was faced with multiple options for how to properly document the four-time major champion’s predicament.

Another easy joke would be to note the potential PIP (Player Impact Program) points boon. But we think an idle vehicle is actually an apt metaphor for yet another season that was subpar by Koepka’s standards. Since capturing the second of his back-to-back PGA Championships at Bethpage Black in May 2019, the 31-year-old has, well, sputtered.

Beset by injuries in both 2020 and 2021, the bright spots — including a decisive win over DeChambeau in The Match back in November — have been few and far between. Koepka did also manage a victory at the Waste Management Open in February, but a 50-year-old Phil Mickelson ran him down a few months later at Kiawah Island to end his bid for a third PGA title.

After occupying the top spot in the Official World Golf Ranking throughout much of the previous three seasons, Koepka has dipped to No. 16 — his lowest year-end position since 2016.

His major slump approaching three years, perhaps 2022 will see Koepka take his game out of the garage and start flooring it once again on those select tracks that seem to bring out his best.