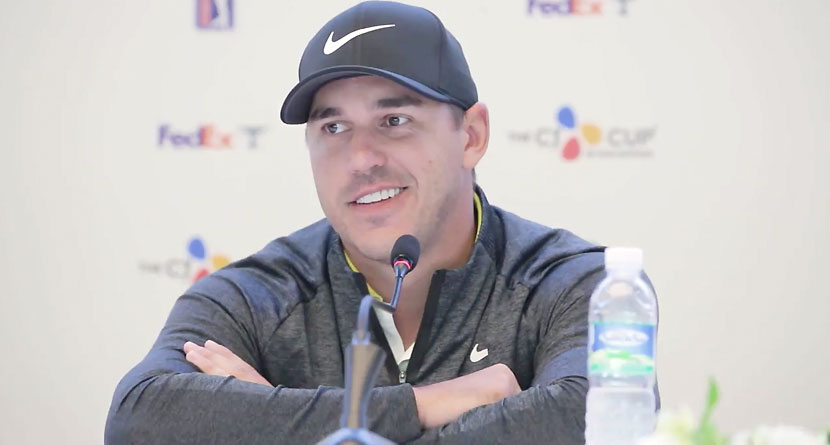 Brooks Koepka has become one of the best interviews in golf.

Whether it’s his obvious bravado and confidence or the fact that he speaks candidly without fear of retribution — or more likely, a combination of both — when Koepka sits down in front of a microphone, he’s as close to must-see TV as it gets when it comes to golfers in media centers.

This week at the CJ Cup on Jeju Island in South Korea, Koepka again made headlines with his pre-tournament meeting with the press thanks to a question that came in response to Rory McIlroy’s assertion last month that a rivalry between himself and Koepka would be good for the game.

“If that’s both of our mentalities going forward, I think that’s good for the game.” https://t.co/9Z770befDk

“Brooks has been undoubtedly the best player in the world for the last couple years. I’ve been lucky that my career and my consistency level has been good for the last 10,” McIlroy said on his GOLFPASS podcast. “I feel like they’ve tried to create a rivalry between myself and Tiger, myself and Jordan (Spieth), myself and Dustin (Johnson), myself and Brooks, myself and Jason Day.

“I needed that mentality going into East Lake because, you know, there was a little bit of revenge in there. He talked about trying to be the dominant player in the game, and that was said to me in the media, and I said, ‘He’s going to have to go through me first.’ If that’s both of our mentalities going forward, I think that’s good for the game.”

Turns out, that may be a one-sided mentality because Koepka brutally shut down the notion of such a rivalry on Wednesday.

“I’ve been out here for, what, five years. Rory hasn’t won a major since I’ve been on the PGA Tour. So I just don’t view it as a rivalry,” Koepak said bluntly, according to a report from the AFP. “I’m not looking at anybody behind me. I’m number one in the world. I’ve got open road in front of me I’m not looking in the rearview mirror, so I don’t see it as a rivalry.

“You know if the fans do (call it a rivalry), then that’s on them and it could be fun. “Look, I love Rory he’s a great player and he’s fun to watch, but it’s just hard to believe there’s a rivalry in golf. I just don’t see it.”

Brooks Koepka denies he and McIlroy have a rivalry – ‘He hasn’t won a Major in five years’ https://t.co/TaRm9Mcyzn pic.twitter.com/Ves7DgPyZh

At No. 1 and No. 2 in the world rankings respectively, and each as the winners of a 2019 Player of the Year award, the storyline of a Koepka-McIlroy rivalry is a natural one as the 2019-2020 season kicks off.

While Koepka is usually the one to play with a chip on his shoulder, whether it be self-manufactured or an obvious slight, it will be McIlroy who will go into the season with some bulletin-board material in the form of Koepka’s rivalry denial.