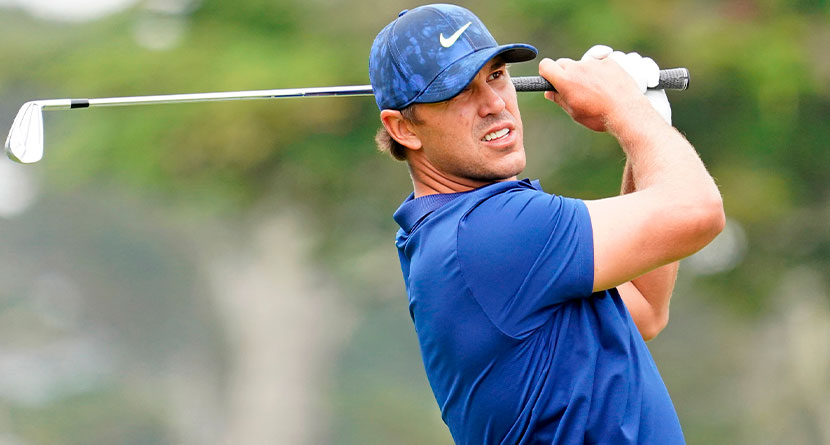 The No. 7-ranked player in the world barely cracked the top-100 in the season-long FedEx Cup standings, and when lingering knee and hip issues failed to subside as he attempted to play his seventh event in a row, he decided to call it a season.

News broke on Wednesday morning that Koepka opted to withdraw from this week’s The Northern Trust, the first leg of the three-part FedEx Cup Playoffs. His decision to do so effectively ended his season as only the top-70 in the standings advance to next week’s BMW Championship in Illinois.

Damn—Brooks Koepka withdraws from the Northern Trust. Had played 6 weeks in a row. Injuries still bothering him, clearly. pic.twitter.com/VPvOht1kTj

Ever the jock, Koepka attempted to keep his injury struggles under lock and key, but moments of vulnerability allowed Koepka to intimate everything wasn’t quite right.

“My golf swing’s fine,” Koepka said at last week’s Wyndham Championship, where he missed the cut. “If I can physically do it, then yes, everything’s fine.”

Physically, it’s not just Koepka’s bum knee that is bothering him; a bulky hip has plagued him in recent weeks as well. During the second round of the PGA Championship two weeks ago at Harding Park, Koepka required treatment from an on-site physio three times, according to ESPN.com’s Bob Harig.

The biggest question for Koepka now becomes how his health will impact the remainder of the jumbled 2020 schedule, which includes a pair of major championships, the first of which is less than five weeks away at the U.S. Open at Winged Foot.

One of Koepka’s biggest (non) rivals, Rory McIlroy said on Wednesday that he thinks Koepka is making the right decision.

“Brooks is one of the biggest names in the game. We’ve all seen his physical struggles since last year,” McIlroy said Wednesday. “It’s maybe never a good time, but it’s a better time than any other time to get it right. You know, take a few weeks off, try to get himself ready for the U.S. Open, and then the Masters coming up, as well.

“I think it’s smart on his part to do that and hopefully comes back healthy and comes back ready to play.”