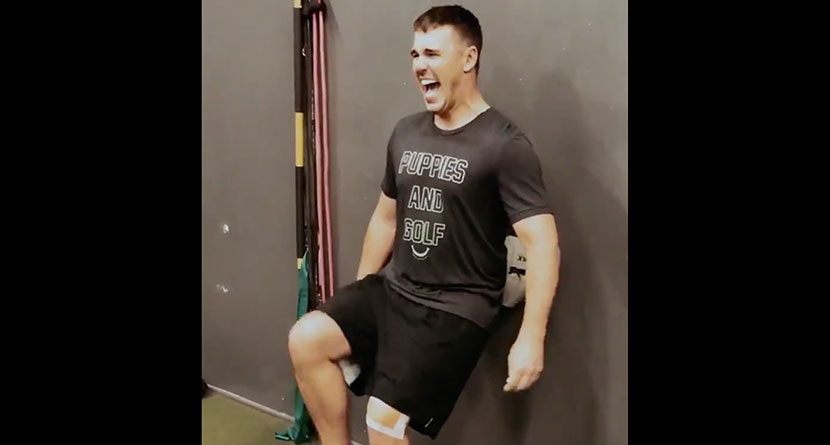 Brooks Koepka is chomping at the bit to get back on the golf course, but when that will be is still up for debate.

After having offseason stem-cell surgery on his left knee, Koepka returned to the course in the fall at the CJ Cup in Korea only to aggravate the injury when he slipped on wet concrete.

Fast-forward a month and a half and Koepka had to withdraw from the Presidents Cup saying he needed more time to heal. With the 2020 PGA Tour campaign kicking off this week, Koepka is conspicuous in his absence at the winners-only event, but a social media post that features Koepka rehabbing his knee was accompanied by a caption that makes you think his return to the course will be sooner rather than later.

It’s been a journey these past 3 months rehabbing my knee but it’s coming along & I’m ready to get back out there healthy for a strong 2020 ? pic.twitter.com/oIFunY7wO0

“It’s been a journey these past 3 months rehabbing my knee but it’s coming along and I’m ready to get back out there healthy for a strong 2020,” Koepka wrote.

The schedule on his website is blank, and he hasn’t committed to playing in any PGA Tour events yet. Last year, Koepka teed it up at Kapalua and then made a pair of European Tour starts in Abu Dhabi as well as Saudi Arabia before returning to North America for the WGC-Mexico Championship in the middle of February.

Koepka has again committed to play in Saudi Arabia, which is scheduled to be played January 30-February 2, but there hasn’t been any word from Koepka’s camp whether or not he’ll be ready in four weeks time.