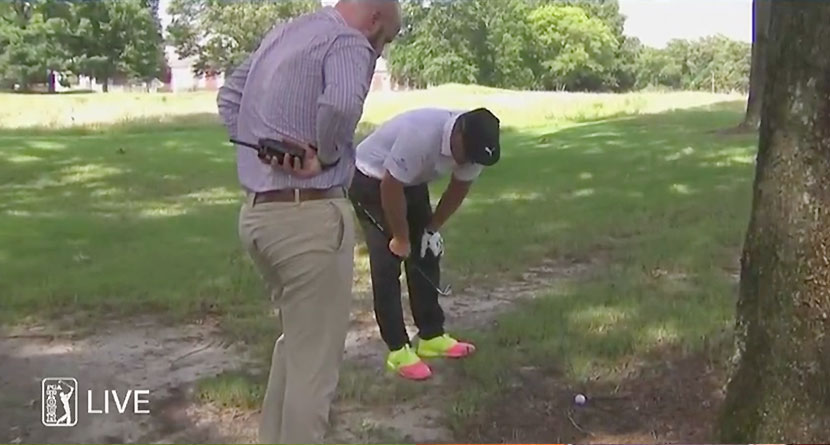 Bryson DeChambeau may be the most entertaining man in golf currently — non-Tiger Woods division — and his latest act took place on Thursday at the WGC-FedEx St. Jude Invitational on the par-4 7th hole at TPC Southwind.

Starting his round on the back nine, DeChambeau fired a bogey-free 4-under par 31 and turned for home making another birdie on the second hole, his 11th of the day, to briefly tie for the lead. A bogey on the par-4 5th hole dropped him back to 4-under par and a wayward drive on the par-4 7th put him in an intriguing situation.

A member of a featured group on PGA Tour Live, cameras followed DeChambeau to his drive left of the fairway. A precarious lie met DeChambeau as his ball nestled between two twigs, but what DeChambeau viewed as a potentially dangerous situation due to fire ants in the vicinity may alleviate the situation with a favorable ruling.

In an interesting twist of fate, the rules official called to the scene was Ken Tackett, the same man who delivered the bad news to DeChambeau two weeks ago at the Memorial that his ball was indeed out of bounds, which led to the five-time winner making 10 on the hole and missing the cut.

CBS Sports HQ offered a live look-in to PGA Tour Live for the full conversation between DeChambeau and Tackett.

Despite a few “red” ants that DeChambeau noticed near his ball, Tackett failed to see the situation as dangerous or one that would result in a free drop from an animal hole, both of which fall under Rule 16 in the Rules of Golf.

After some back and forth, Tackett closed the case with a simple explanation.

“It doesn’t interfere with your stance regardless anyway,” Tackett said. “It’s not an animal hole.”

DeChambeau hacked out of the difficult lie advancing the ball 96 yards to short left of the green. From there, it took him four more shots to hole out for a double bogey.

After the round when asked about the interaction, DeChambeau hinted that he didn’t really feel endangered, but more was looking to use the rules to his advantage in order to get a drop from a poor lie.

“Yeah, that was weird,” DeChambeau said. “So there was discolored dirt and I saw a couple red ants there and I was thinking, ‘hmm, anthill, may get something,’ or whatnot. Asked (the rules official) and he was like, ‘well, it’s got to be, you know, kind of endangering you.’

“And it just an anthill. So there was just discussion there and he didn’t think it was necessary for a drop. so I’m always going to respect the officials and go, ‘okay, no issue, that’s fine.’

“Didn’t help that I had a really, really bad lie, too. I had two twigs lodged in between my ball. Is what it is.”

DeChambeau posted a round of 3-under par 67 to sit in a tie for 10th place after one round, five shots back of first-round leader Brooks Koepka.