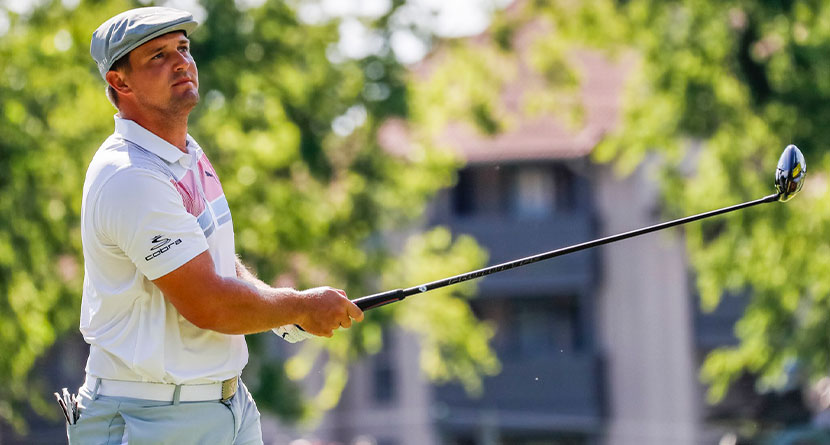 With all due respect to Daniel Berger and his breakthrough victory last week at the Charles Schwab Challenge, the biggest talking point of the PGA Tour’s return has been Bryson DeChambeau.

Golf’s mad scientist has fans, pundits, players and coaches all talking about his dramatic body transformation and the impact it has had on his game.

“At the start of the year, he came out, and he was a bit bigger,” Rory McIlroy, DeChambeau’s playing partner on Sunday at Colonial, told reporters at Harbour Town on Wednesday. “You could see he was getting a bit of speed and stuff, and he was hitting it a long way. But he hit a couple drives on Sunday that Harry and I just looked at each other, and we’re like, holy shit, that was unbelievable.”

DeChambeau didn’t win last week — he finished in a tie for third — but his increase in distance was validated.

For his next trick, DeChambeau showed up this week to Harbour Town Golf Links on Hilton Head Island and came so close to clearing the net and putting balls into folks’ kitchens that he had to back up to the edge of the range.

Insane speed from @b_dechambeau Launching bombs and having to move to the very back of the range or it’d be in someone’s kitchen 360 yards away. Unbelievably impressive to witness 🔥🔥💣💣💣🙌🏾 pic.twitter.com/LPLdHrPsHR

His speed caught the attention of multiple top coaches on the driving range including Jonathan Yarwood and Mark Blackburn, both of whom posted videos to social media of DeChambeau on the range.

What does 200mph ball speed look like? 🚀🚀🚀🚀🚀🚀🚀🚀🚀🚀🚀🚀🚀💣💣💣💣💣💣💣💣💣💣💣💣💣Here you go! Full credit to @brysondechambeau for putting up 200mph today @RBC heritage! Fore on #8 green though!!!!! Golf is a changing folks! SPEED & POWER Strokes Gained Driving has a big distance bias so Bryson is effectively hacking the system with his speed gainz 💪🏻🤓🚀As was evident with his driving performance last week @charles_schwab_challenge👊🏻 Bryson will get even more distance from his speed once he gets the the spin # matched up (in his defence not easy at these speeds) Massive credit to Bryson & his team @mikeschygolf @chriscomogolf @cobragolf for the gainz 💪🏻👍🏻👏🏻👏🏻👏🏻this was really fun to watch👏🏻👏🏻👏🏻👏🏻 @mypdev @greystonegcc @academies.swingu @titliest @footjoy @vokeywedges @scottycameron @sashomackenzie @gaspsystems @gasplab . . . #golf #putting #golfcourse #golfer #juniorgolf #collegegolf #swingu #golfchannel #whyilovethegame #golfgods #golfclub #pga #pgatour #golfislife #golfpro #golfswing #golfinstruction #golflife #golfcoach #golfpractice #golfdigest #golfmagazine #golflesson #golftips #golffitness #golfdrills #golfswinganalysis

It’s become clear that any range with a net has become a sort of game for DeChambeau, as evidenced by his repeated attempts to clear the net a few months ago at the Presidents Cup.

Bryson Dechambeau was hitting his driver so far on the range he needed permission to continue.pic.twitter.com/iQruaXdhsY

Perhaps even more impressive and indicative of how DeChambeau’s advances in distance have taken the Tour by storm is a picture shared by Golf.com’s Luke Kerr-Dineen, which shows multiple pros stopping to watch Bryson launch some drivers.

Bryson is swinging so hard and fast you can see his driver shaft start to bend literally 3″ into his takeaway pic.twitter.com/yJdHf227UE

It’ll be interesting to see how his strategy plays out this week at the tight and tree-lined Harbour Town.