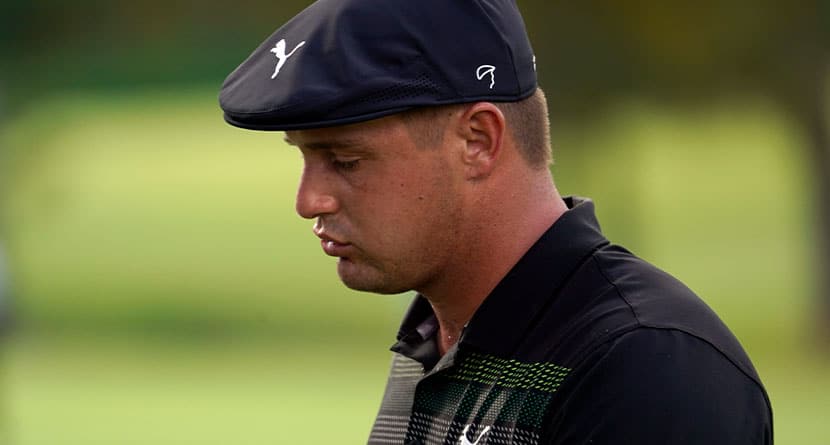 Before the 2020 Masters Tournament started, Bryson DeChambeau pronounced that he considered Augusta National, with his new-found length, to be the equivalent of a par-67 for him.

“I’m looking at it as a par 67 for me because I can reach all the par-fives in two, no problem,” DeChambeau said, adding that he’s been driving the par-4 3rd hole with a 3-wood. “If the conditions stay the way they are, that’s what I feel like par is for me. That’s not me being big-headed.”

Setting his own “personal par,” DeChambeau said that even if he plays the reachable holes poorly by his standards, he can still put up a number that is under conventional par and keep himself in the tournament. And not to saddle DeChambeau with another nickname — Nostradamus — but that’s exactly what he did on Thursday at Augusta National Golf Club.

With all due respect to Jack Nicklaus and Gary Player, the most anticipated opening tee shot came from DeChambeau some three and a half hours after the legends struck theirs, thanks to a lengthy weather delay. DeChambeau bombed a 3-wood 327 yards down the 10th fairway, hit a 9-iron to 6 feet and he was off and running.

Of course, the issue that’s plagued DeChambeau around Augusta National in year’s past was his putting, and he got off to a poor start missing the short birdie putt on 10, and that’s when things started to take a turn for the worst.

Facing a difficult tee shot on the par-4 11th hole, year-in and year-out one of the hardest holes on the course, especially for a drawer of the golf ball like DeChambeau, the U.S. Open champ overcooked his tee shot, sending it well left into the trees.

He was able to punch out and get up-and-down from 43 yards to save par. A routine par on the par-3 12th took him to his first par-5-turned-par-4 (in his mind) of the day, the 13th. From there, DeChambeau hit his drive into the pine straw, nuked an iron over the green in two into some bushes, hit a provisional into Rae’s Creek, located his original ball, took an unplayable lie, chunked a chip and tapped in for a 7.

Bryson’s ball is … somewhere in there. pic.twitter.com/w1TjexX9eA

After another scrambling par at the 14th hole, things slowed down for DeChambeau and he birdied the par-5 15th and par-3 16th to get back to even on the day.

And that’s the scary part. DeChambeau knocked it around the most scorable portion of Augusta National Golf Club on arguably the most gettable day many players have ever seen, and came out of it in even par. He would go on to turn to the front nine, make three birdies against one bogey and post a 2-under par (for everyone else) 70 to sit in a tie for 21st after the first day of competition.

What we saw on Thursday was arguably Bryson DeChambeau’s floor. Even playing poorly, his length and all-around game is going to allow him to shoot 2-under par on his bad days.

“This golf course, as much as I’m trying to attack it, it can bite back,” DeChambeau said after the round. “It’s still Augusta National, and it’s the Masters. It’s an amazing test of golf no matter what way you play it.

“I tried to take on some risk today. It didn’t work out as well as I thought it would have, but at the end of the day, I’m proud of myself the way I handled myself and finished off. Birdieing 8 and 9 was a testament to my focus level and wanting to contend here.”

Playing the four par-5s at Augusta National in 1-under par and failing to make a short birdie putt on the par-4 third hole, DeChambeau let opportunities he was hoping to two-putt for birdie slip by.

He’s still five shots back of Dustin Johnson, Dylan Frittelli and Paul Casey after 18 holes, but he’s proven that his strategy is working, even if he isn’t firing on all cylinders.